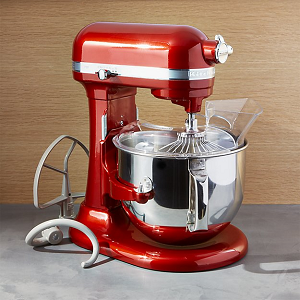 [Blind Gossip] This blind item is about a popular talk show that has been on the air for years. The show films in front of a live studio audience.

Every year, they do a holiday gift giveaway. Sponsors contribute their products in exchange for a promotional mention on the show.

Of course the audience loves it. They scream and cheer – and cry! – as they walk away with literally thousands of dollars of gifts simply for being an audience member.

There is something nefarious going on behind the scenes, though.

It’s a scam, and we’re going to tell you how it works.

Let’s say The Show begins negotiations with KitchenAid, a manufacturer of household appliances. They tell KitchenAid that they want to include a KitchenAid Stand Mixer (which is a popular holiday gift) as part of their holiday giveaway.

The negotiations between The Show and the manufacturer begin.

Which model of mixer? The low end mixer you can buy on sale for $199 or the high-end mixer that retails for over $500? Will the manufacturer include attachments?

It’s not just about the retail value of the gifts. How long will The Host talk about the mixer? Will they demonstrate the mixer on air by whipping up a batch of Christmas cookies? Will KitchenAid also buy some commercial time during the show to promote their other products?

KitchenAid agrees to include some overage to the order just in case any of the boxes are damaged in transit. This is done with the strict instruction that any product that is undistributed to the audience is to be returned in its original packaging to the manufacturer.

Let’s say that all of the mixers arrive in good condition.

Now, what if the audience actually only consists of 300 people the day of the giveaway?

Regardless of whether that error was innocent, The Show sends those 120 extra mixers back to the manufacturer as per their agreement, right?

They might send back a few of the mixers to fool the manufacturer.

The props department is then told to remove the rest of the mixers from their boxes and to throw away the packaging. Now that merchandise can’t be returned.

They split up the bounty.

Keep in mind that there are multiple days of giveaways with multiple sponsors involved, so The Show has a warehouse filled with literally millions of dollars of brand-new, high-end products.

The scam we are talking does not involve one or two items that “fell off a truck.” We are talking about the large-scale, purposeful theft of brand new, high-end merchandise by a popular talk show.

Famous Host: You are a producer of the show. Are you part of this? Are you aware of this? You are now!

[Optional] What one material gift are you hoping for this holiday?