[Blind Gossip] We have heard from a couple of different sources that the upcoming reboot of Sex and The City is getting rid of a major character!

Given the fashion choices at a recent shoot, that rumor seems plausible.

While black is the standard clothing color of those who live in Manhattan, the Sex and The City female characters are known for their colorful fashion choices.

In the original Sex and The City series, there were very few scenes in which all the characters were dressed in black.

One such scene involved them attending a wedding.

Carrie commented, “We look like The Witches of Eastwick.”

Once that joke was used up, you knew that the entire cast would never be seen in black again unless dictated by decorum.

Thus, another time they all wore black was when the women were grieving.

Here they are in a scene where the women came to support Miranda after her mother passed.

While filming in New York City recently, some of the principal cast members of the reboot (titled And Just Like That) were wearing all black and appeared to be acting very somber.

We hear it’s a major character.

Who do you think they offed?

[Optional] Good plot move? Will you be watching the new series? 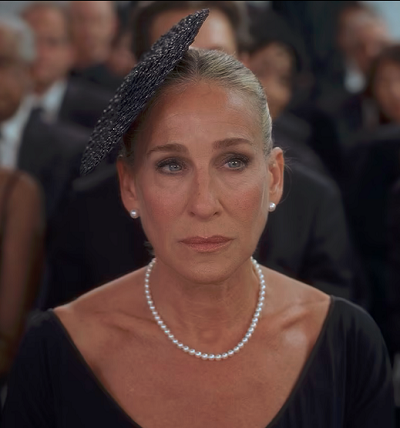 The spinoff of the popular TV series Sex and The City has finally aired!

We know you were all waiting to see how they dealt with the departure of actress Kim Cattrall and her character Samantha Jones from the series.

And Just Like That did not waste any time addressing the issue.

The very first scene – even before the opening title – the remaining characters disclose Samantha’s fate.

The three women are in a restaurant.

They run into society matron Bitsy von Muffling. She asks them, “Where’s the fourth Musketeer?”

Then Charlotte clarifies, “She’s in London.”

Whew! So Samantha is alive!

A couple of scenes later, we find out that Carrie’s friendship with Samantha fell apart after Carrie fired Samantha as her publicist. While Carrie did it for financial reasons, Samantha stopped returning her calls. And moved to London.

“I always thought the four of us would be friends forever,” Carrie says wistfully.

Well, Sarah Jessica Parker, you would have been friends forever on screen if you hadn’t treated Kim Cattrall so shabbily in real life!

So, if Samantha is still alive, whose funeral were they attending?

The next few scenes don’t provide any answers. Instead, we are introduced to three new Black characters, a nonbinary Latina character, and discussions of race, gender, masterb*tion, human rights, podcasts, Instagram, and Peloton.

Carrie is home with Big. Yes, Big is still alive. 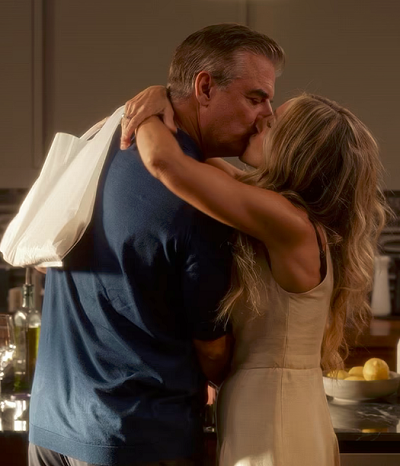 They talk about sex and Carrie asks Big to masterb*te in front of her. He complies.

Carrie then goes out for the night to attend a recital for Charlotte and Harry’s daughter, Lily.

All the old gang is in attendance, including Harry, Steve, Anthony, and Stanford.

So, they are all still alive, too!

Instead of attending the recital, Big stays home to ride his Peloton.

During his exercise session… he suffers a heart attack!

Carrie comes home to find him slumped on the floor next to the Peloton.

It’s the end of Big.

And the end of the Peloton endorsement. 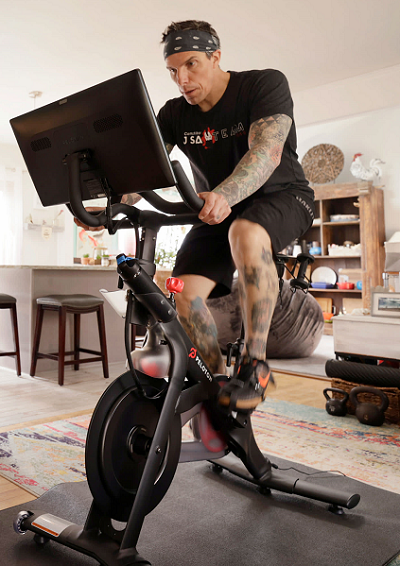 The next episode, everyone gathers for Big’s memorial.

The memorial is held in a very stark and modern space. While Carrie insisted that there were to be no flowers, one arrangement arrives. Before Carrie rejects it, she asks who sent the flowers. She is handed a card.

Carrie says the flowers can stay.

And just like that… the producers open the door to bringing back Samantha!

Kudos to Booboogirl for being first with the correct response!