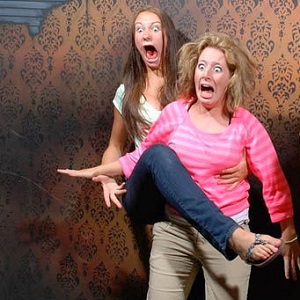 [Blind Gossip] We’ve been talking for years about how messed up this singer really is.

For a long time, people blamed fame or alcohol or drugs for his odd behavior.

It’s more serious than that. He is mentally ill.

However, his family is limited in what they can do.

He refuses to get treated voluntarily and they can’t have him committed until he actually does something. He has to either hurt himself or someone else or directly say he’s going to do that before they can do anything. He’s tricky, though, and hasn’t threatened anyone directly.

What they are talking about is getting him put on an involuntary psychiatric hold. In California, it’s called a 5150.

Remember when Amanda Bynes’ parents had to wait until she doused her puppy with gasoline before they could get her some help? They were powerless to do anything until something bad happened. 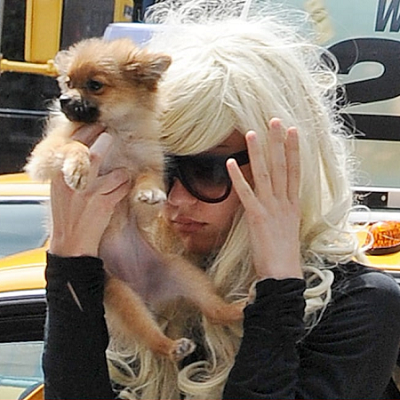 They feel helpless but, even worse, they feel terrified! He has an enormous arms stash and they are afraid for their lives.  Sure they can get restraining orders, but what are they going to do if he hunts them down? Wave a little piece of paper at him? The whole family is seriously discussing how they can go off the grid so he can’t find them.

So if members of his family are suddenly a lot less visible, you’ll know why.

[Optional] What do you think is going to happen? Please keep your comments civil.

Aaron Carter started out as one of the cutest child pop stars ever. 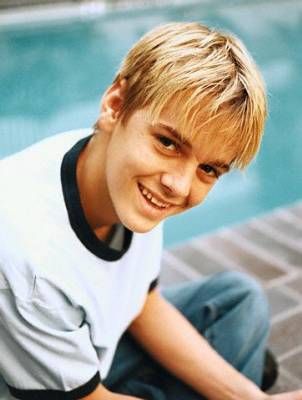 Unfortunately, that cuteness and talent did not guarantee him a happy and successful life.

Despite selling over 60 million albums over the course of his career, his personal life has been… challenging.

Aaron Carter’s father, a bar owner, passed a few years ago at the age of 65.

Aaron Carter’s mother Jane is a recovering alcoholic about whom Aaron said, “She drank 2 to 3 pints of vodka every day for 17 years.” 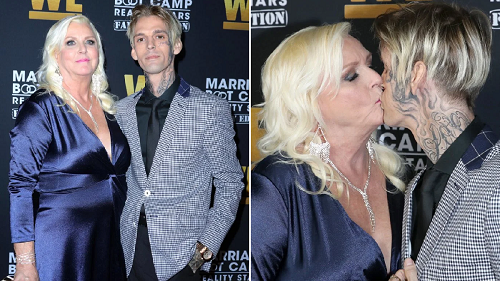 Aaron accused her of stealing his money but was there for her after she relapsed in her sobriety.

Aaron was one of five children. 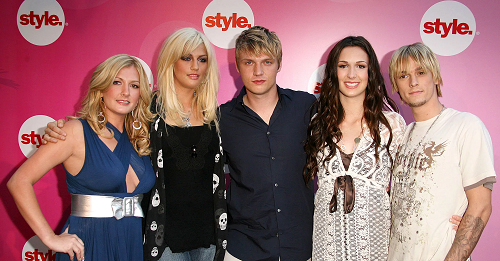 Aaron Carter’s sister Leslie, who was also a singer, OD’d at the age of 25. Aaron accused her of being bipolar and of assaulting him when he was a child. 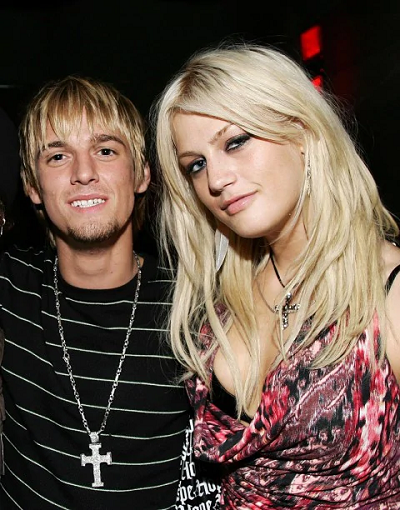 Aaron’s brother, Nick Carter, was a member of the famous boy band The Backstreet Boys. 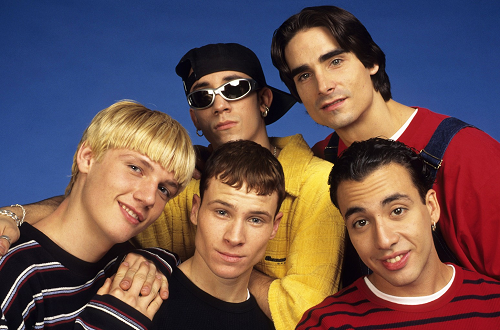 Nick has acknowledged that he is an alcoholic. Aaron has accused Nick of multiple assaults. 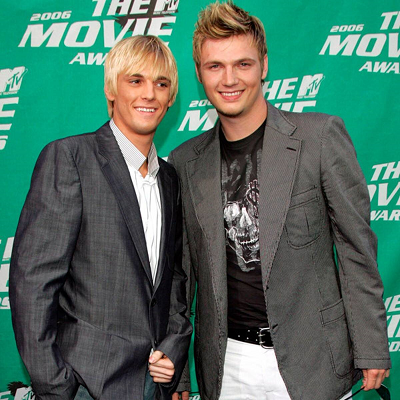 We don’t know if Aaron Carter’s accusations are true.

It is clear, however, that his family life has been messy.

Then, after not speaking for more than four years, Nick Carter took out a restraining order against Aaron Carter.

Because Aaron threatened to harm Nick’s pregnant wife and their unborn child! 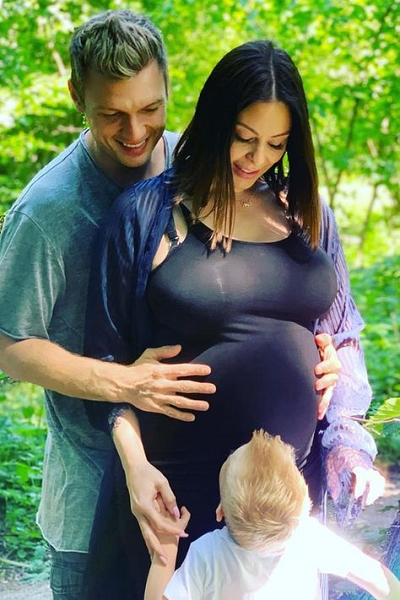 Nick said, “We were left with no choice, but to take every measure possible to protect ourselves and our family.”

Aaron Carter has another sibling, a twin sister named Angel. Here is a pic of Aaron and Angel together at Angel’s wedding to Corey Conrad. 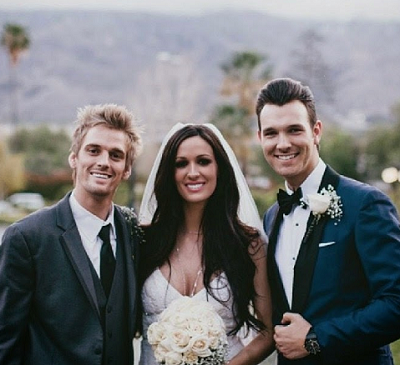 Unfortunately, Angel also had to get a restraining order against Aaron in order to protect her own family!

Aaron allegedly told her, “I have people that would come and harm you.”

Aaron was ordered to stay 100 yards away from both siblings and their respective families.

While many people accused Aaron of doing drugs or being drunk, we knew there was a major underlying problem: mental illness.

Since then, Aaron has stated that he has anxiety, schizophrenia, multiple personality disorder and manic depression (another term for bipolar) and has also provided a long list of prescription drugs that he is taking.

The week after we wrote this blind item, Aaron Carter said that the LA Sheriff’s office had visited his home and tried to place him on a 5150 psychiatric hold.

Your friends at Blind Gossip told you that was coming!

A couple of months later, Aaron had some sort of episode and wound up in the hospital.

Since then, Aaron Carter has embarked on a new career: making p*rn.

This is Aaron Carter with his newest girlfriend. She is an “Instagram Model” who is “coaching him” in is new career. 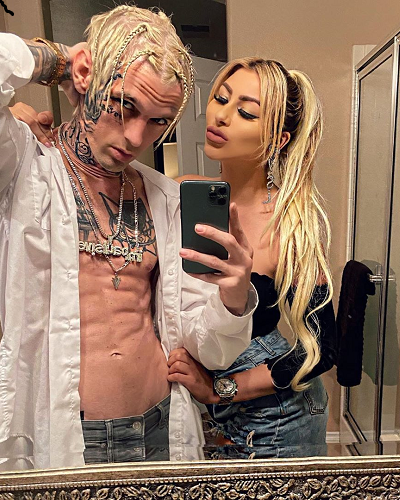 Beachbum was first with the correct response.

The National Alliance on Mental Illness (NAMI) is the nation’s largest grassroots mental health organization dedicated to building better lives for the millions of Americans affected by mental illness. If you or a loved one could use some help, call the NAMI Helpline at 1-800-950-6264.

We have three big updates to this story!

Here is a pic of Aaron and Melanie last week. Aaron is holding their new baby. 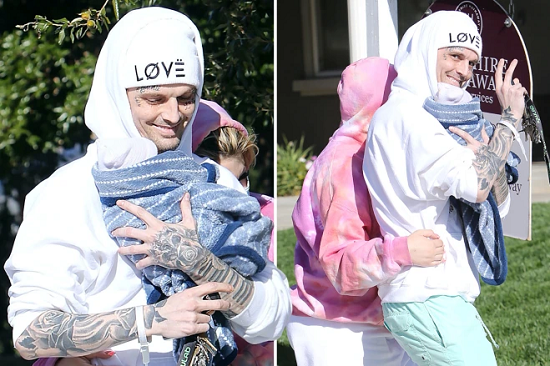 He looks so happy, doesn’t he?

Well, that happiness lasted less than a week, because…

2. Just one week later, Carter has broken up with Martin, claiming that she deceived him.

3. Carter’s home situation also appears to be in distress. His house is for sale and he says that he is sleeping in his car.

Let’s take these three developments one at a time.

Aaron Carter is all about his baby boy!

The 33-year-old singer and his fiancée, Melanie Martin, have welcomed a son named Prince, Aaron announced on his Instagram on Monday, Nov. 22.

The infant, who is the couple’s first child together, arrived after an emergency C-section following 13 hours of labor, according to the new dad.

Aaron shared the happy news alongside a photo of himself cutting the umbilical cord on his son at the hospital, writing in the caption, “Emergency C Section after 13 hours of labor but my fiancé is in great health thank you lord and the incredibly sweet loving staff here.”

Here is a pic of Aaron Carter cutting the umbilical cord. 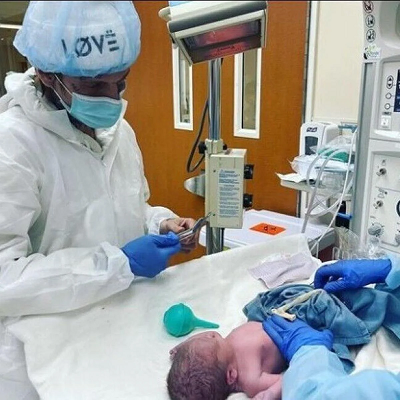 “Prince is precious I love you son,” he continued. “Your mommy loves you as I drop tears on the phone.”

Aaron and Melanie first went public with their relationship in January 2020.

A happy announcement. However, they did conveniently leave out the part where Aaron Carter’s fiance was arrested last year for domestic abuse.

From The Daily News:

Aaron Carter’s girlfriend arrested as singer claims she choked him

Aaron Carter’s girlfriend was in police custody Monday after an alleged incident of domestic violence at the singer’s home in Lancaster, Calif.

Carter, the younger brother of Backstreet Boys singer Nick Carter, claimed in a series of social media posts that girlfriend Melanie Martin choked and punched him after he broke off their relationship and asked her to move out Sunday morning.

Carter, 32, told viewers of the live stream he would answer their questions about the assault if they donated money on his cash app.

He also discussed his acrimonious relationship with former girlfriend Lina Valentina, which ended with a restraining order partially granted to the singer in August.

That was another mess. Here’s a pic of Lina Valentina. 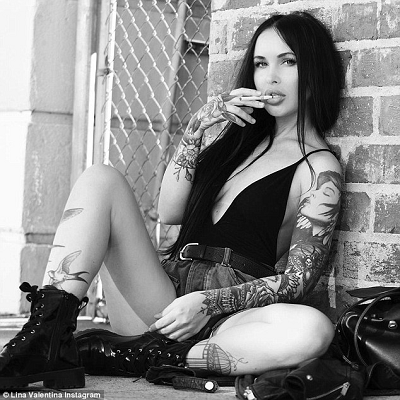 Aaron’s twin sister Angel, meanwhile, obtained a restraining order against the “I Want Candy” singer last year with claims he threatened her family and “was in possession of assault-style firearms,” according to the petition obtained by the Daily News.

“In light of Aaron’s increasingly alarming behavior and his recent confession that he harbors thoughts and intentions of killing my pregnant wife and unborn child, we were left with no choice but to take every measure to protect ourselves and our family,” Nick claimed in a Twitter post.

In response, Aaron said he and his brother were “done for life.”

After that , Carter got back together with Martin. They got engaged. They got pregnant.

Aaron Carter – who threatened his family, including spouses and children and unborn children, over the past couple of years to the point where they took out restraining orders against him – then became a father for the first time.

However, this story does not have a happy ending.

Just one week after she gave birth, Carter and Martin broke up!

Just one week after welcoming their first child, Aaron Carter and fiancée Melanie Martin have split. 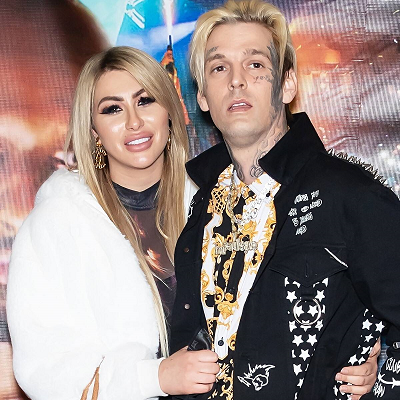 The reason for the split?

Apparently, Martin was going behind his back to communicate with Aaron Carter’s estranged family members!

“Due to personal reason [SIC] Melanie Martin and I have decided to go our separate ways,” Carter, 33, tweeted on Tuesday, November 30. “There has been a very big lie and my sister communicating w my ex fiancé [SIC] ruined everything considering she knew what angel tried to do to me in court thanks angel you ruined my family. God bless.”

For years, the singer has had an up and down relationship with his family, including his twin sister, Angel Carter, who he is referring to in his tweets.

“I have the most conniving deceiving family and Melanie has been lying to me the whole time communicating with my twin sister and the family members who tried to put me in prison and who tried to get a conservatorship on me in court,” he continued via Twitter. “I’m in shocked this is horrible.”

In multiple tweets, the Florida native claimed that Martin is moving to Las Vegas with his son and allegedly told Aaron he would never see him again.

Oh, boy. Martin told Aaron Carter that he would never see his son again? That’s a vicious move and it is not surprising that it would trigger him to engage in this new online rant.

He also called out his brother Nick Carter and Nick’s wife, Lauren Kitt. 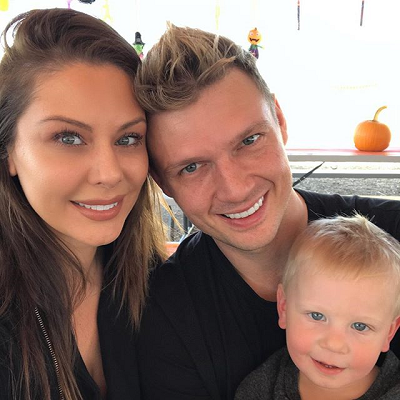 Keep in mind that Nick Carter and his wife Lauren Kitt, currently have a restraining order against Aaron Carter.

“Don’t worry you trolls won you ruined my life alongside w Angel my twin, Lauren Kitt and nick god bless. I’m a good man. I’m sleeping in my car ok.. and he is in the house.

We do not know is Aaron Carter is sleeping in his car on a voluntary basis or if his ex-fiancee took out a restraining order against him.

How utterly rude of you. Please respect my privacy thinking you know what’s best for MY SON!!! Thanks,” Aaron tweeted. “Then tore time when she knew not to be speaking w a family member who tried to 5150 me and put me in jail and tried to entrap me. She knew she wasn’t supposed to be talking to my sister lying about it for two years. Thank you Angel my sister and trolls for destroying my family.”

On Tuesday, Aaron explained that the fact that they just had a child is “devastating,” but said called his ex’s actions “unforgivable.”

He claimed, “She knew my boundaries and especially not to speak to a certain half of my family that tried to depict me as a crazy psychotic human being and a ped*phile and that’s who she was speaking to my twin sister who told my brother that my ex girlfriend told her that I wanted to kill Lauren Kitt and their unborn child. They cost me $50,000 in court my family trying to drain me so my house would be taken away from me in foreclosure labeling me a ped*phile.”

Aaron Carter just put his Southern California house on the market again, this time for approximately $850,000. 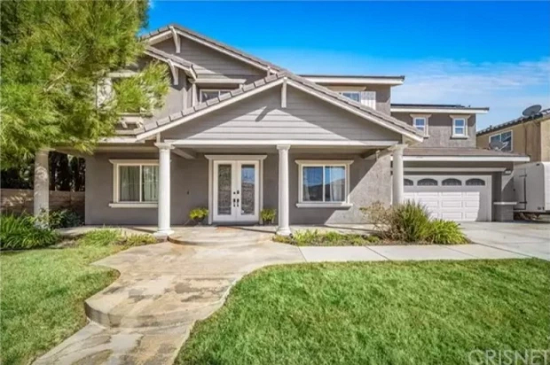 The house was for sale on and off for the past year, but it sounds like Carter is in financial trouble and may be heading towards a foreclosure situation.

None of this is good.

Aaron Carter is mentally unstable and in distress… he’s selling his house to pay his legal bills… his ex-fiancee is his newest enemy… and there is now a new baby involved in this all this.