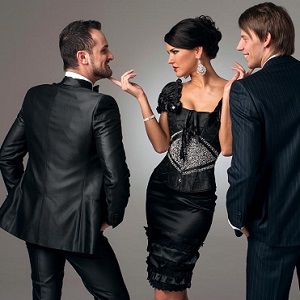 [Blind Gossip] It was her marriage that led to this woman to becoming a celebrity in the first place.

However, as her show became more successful, she felt little need to hold on to the marriage.

Her husband disrespected her by cheating, and she did the same. Then there was the legal trouble. He supported her, but she abandoned him.

Of course the kids were caught in the middle.

Next thing you know – bada boom bada bing – they both want a divorce and hubby will be moving far away.

Wife must be happy about that, right?

She has to keep the drama going in order to get paid. There’s a big payday for her if she can go visit him with a camera crew to capture footage.

The only problem? He’s mad at her.

She pretends that everything she does is for the kids, but it’s really just for her. She did him dirty. Now she’s going to pay for that. She had better give him 75% of the money for the shoot or she can forget it.

[Optional] Is his demand appropriate?