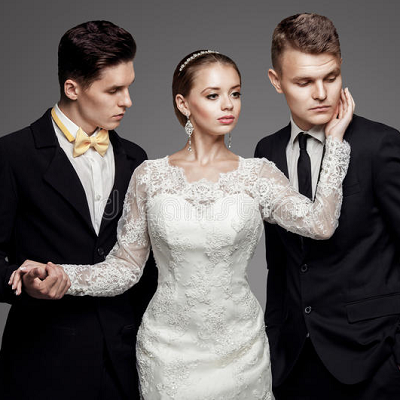 [Blind Gossip] Getting engaged to be married is normally a happy event.

Man and Woman dated for many years.

Although they never married, two good things came out of the relationship.

The first is that they had a child/ren together.

Yes, while they both consider themselves business people, they are really just reality stars who have made money off of a continuous stream of drama and publicity.

After Man and Woman broke up (again) a few years ago, they both dated other people.

Man recently broke up with his girlfriend.

Woman recently got engaged to her boyfriend.

You may be wondering why he would be so mad. After all, they have both dated other people.

It turns out that there is actually a good reason for his rage.

Up until very recently, [Woman] was playing the two men off of each other. She didn’t like that [Man] was dating “little girls,” so she was ramping up the PDA with her boyfriend to get back at him.

Then she hit on a better plan.

Man told his girlfriend that he was seriously thinking about having another baby with his ex.

Of course, this greatly upset Girlfriend! She cried to her friends that he was hung up on his ex. She told him that they were talking about having another baby together. Needless to say, no one from Girlfriend’s side thought that was OK.

Man and Girlfriend broke up.

He was actually a little surprised about that. He thought she would stick with him.

At the same time, Woman was telling her own boyfriend that she wanted to have just one more baby… and that Man was trying to convince her that he should be the father.

Boyfriend stepped up and said that if she wanted to have another baby, he would love to be the father.

She said she would only do that if they were really committed to each other.

So they got engaged.

In conclusion, Woman played the two men off of each other, forced a break up between her ex and his girlfriend, got herself engaged, and created a very decent story line for her next reality show.

Given how plotted out all of this was, we would not be the least bit surprised if our reality star got pregnant quickly.

[Optional] What do you think will happen? Always use real names and keep your comments civil.

Previous Post: « George Clooney Got Dumped In The Most Insane Way
Next Post: Family Fame Is Making Her Miserable »