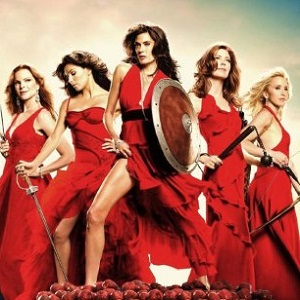 [Blind Gossip] If you thought that the set of Desperate Housewives was a friendly and collegial place, the letters of support that her former colleagues have written for Felicity Huffman are showing a different story!

Letters of support are intended to get a judge/jury to be more sympathetic towards Huffman for her role in helping her daughter lie cheat her way into college as part of the Varsity Blues scandal.

Describing Huffman’s upbringing with her own mother as “sometimes violent,” Macy wrote the actress “was largely raised by either her sisters or, being the youngest, left to her own devices.”

“As an example, she moved to Los Angeles for a year when she was 15 years old to pursue acting,” he wrote. “She lived with a 22-year-old friend of the family and put herself in high school and found her way to auditions and classes all on her own. I think the result of her unstructured upbringing was a determination that her children would always have a mother there backing them up.”

He also discussed and the difficulty of raising children in Hollywood, Huffman’s distress about their daughter’s anger toward her after the scandal broke, and their daughters’ nightmares following Huffman’s arrest by the FBI.

Now on to her Desperate Housewives colleagues.

“People were commenting on how extraordinarily beautiful the cast was,” but Huffman was the only actress who had not previously modeled or played a “sexy vamp” before landing the role on the series.

“After the event feeling self-conscious, Felicity called her husband character actor William H. Macy and said to him somewhat tearfully, ‘I feel like the ugliest one in the room,’” he wrote in the letter.

The message here is that you should feel sorry for an attractive woman who makes a good living by starring on a TV show.

Next, a blind item from Marc Cherry.

Besides discussing her insecurities, Cherry spoke about Huffman’s kindness on set in his letter — particularly when there was a “problematic cast member” on the show who ultimately decided she “would no longer speak to her fellow cast members.”

“Felicity still insisted on saying, ‘Good morning’ to this actress, even though she knew she wouldn’t get a response,” Cherry wrote. “I found out about this and asked Felicity about it. She smiled and said, ‘Just because that woman’s determined to be rude, doesn’t mean she can keep me from being polite.’”

Who was the Rude Actress?

Finally, Eva Longoria piped in a with a blind item of her own.

The mother of one reflected on the cast’s first table read, during which she sat alone, “scared and unsure,” but it was Huffman’s “gentle character and kind heart” that reassured Longoria.

“She sat down beside me and never left my side since that day,” Longoria noted, adding that she was “bullied at work by a co-worker” but the “anxiety” of the incident “stopped” when Huffman intervened.

We don’t know if Rude Actress and Bullying Co-Worker are the same person. We tend to think that the Bully Co-Worker is an actor or actress, as a crew member would likely have been fired under the same circumstances.

Obviously, these stories are all designed to make Huffman look like the ugly duckling who overcame her own childhood and insecurities to become a hero who stood up for others.

Not sure if it works.

[Optional] You are judge and jury. What sentence would you give Felicity Huffman? 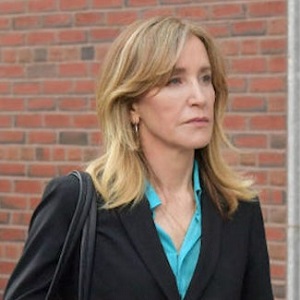 Felicity Huffman is going to prison!

Felicity Huffman gets 14 days behind bars in college scam

Actress Felicity Huffman has been sentenced to 14 days in prison for her role in the sweeping college admissions scandal .

The “Desperate Housewives” star was sentenced in Boston’s federal court Friday after pleading guilty in May to a single count of conspiracy and fraud.

She was also given a $30,000 fine, 250 hours of community service and a year of supervised release.

She has admitted to paying an admissions consultant $15,000 to have a proctor correct her daughter’s SAT exam answers in 2017.

Huffman said before sentencing that “I am deeply ashamed of what I have done. I have inflicted more damage than I could ever imagine.”

She’s the first parent to be sentenced among 34 charged in the scheme.

Lots of crying from Felicity Huffman in the courtroom.

Huffman is asking to be incarcerated at the all-women’s minimum security prison in Dublin (which is in Northern California). She will likely only serve 11 days, as federal sentencing guidelines only mandates that she serve 85% of the time sentenced. She has to report to prison within the next six weeks.

Neither she nor her team had any comment after Huffman left the courtroom.