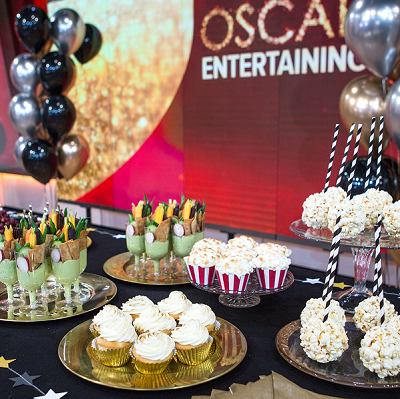 [Blind Gossip] One of the acting nominees was really working it at one of the many post-Oscar parties!

She was trying very hard to make sure she met every important person in the room. She wasn’t avoiding the other actors but she was definitely aiming for the producers and directors she wants to work with.

She kissed up to every one of them. If they were male, she was touching their arm and laughing way too loud at their jokes. “Oh my god! That is SOOOO amazing! You are SOOOO funny!”

It was fun to watch. I didn’t realize how ambitious she was.

Nothing wrong with being ambitious.

Maybe our actress was trying a little too hard, though!

She left the party the same time as me and we were both waiting for our cars. She was complaining to the guy she was with, “I don’t feel well. I really don’t feel well.”

She walked a couple of steps away, opened her bag, and BLURRGH.

Nooo! Not in the bag! Nooo!

I have to say that it was the most delicate tossing of the cookies I’ve ever witnessed. She was very composed and came back like five seconds later. Then she actually apologized to the guy! I don’t know why she did that. She was just overly polite about the whole thing. Then they got into the car and left.

This all happened in under one minute.

Did she seem drunk?

Not really. I saw her drinking but she wasn’t falling over or anything.

Maybe it was something she ate.

Or maybe it was the stress of kissing up to so many Hollywood bigwigs in one night.

Hope she is feeling better!