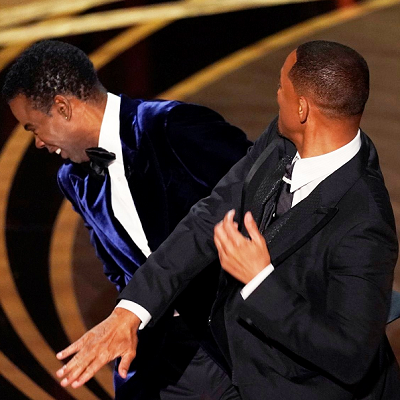 [Blind Gossip] At one of the Oscars after parties, the focus was definitely on the shocking altercation between Will Smith and Chris Rock!

I was hanging with some actors at [redacted] and everyone agreed that it was not staged and that it happened spontaneously.

However, there was some disagreement as to who was at fault.

One actor – who is a previous Oscar nominee/winner – actually thought the whole situation was funny.

He was watching it on repeat on someone’s tablet and laughing. He was saying, “C’mon! That’s a girly slap!”

He said that if Will Smith was a real man, he would have knocked Chris Rock out cold with one good punch to the face.

He was also going on about how if Chris Rock had insulted HIS wife, he’d be waking up in a hospital!

So our tough guy actor was not horrified by the event. He thought it was justified. And he found it funny. And he even thought that there should have been more violence.

Our tough guy actor had one more comment about Will Smith.

That comment was likely in reference to Will Smith and Jada Smith’s open marriage and the affair she had with August Alsina.

Remember when the Oscars was a night of movie stars, glamour and class? That suddenly seems very long ago…

[Optional] Your reaction to Will Smith slapping Chris Rock? Was the assault justified?