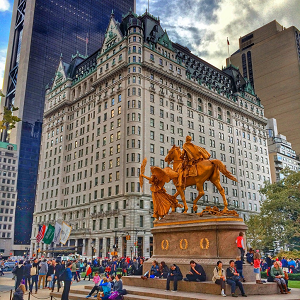 [Bloomberg] By matter of corporate philosophy, every guest should feel like a VIP at The Plaza Hotel in New York City.

But a hierarchy still exists among those who check-in at reception.

At the top of the pyramid are kings, queens, and heads of state—or as butlers call them: V1s, and they are ever-present on the property.

On the bottom of the VIP totem pole is the SA group, known complainers or otherwise difficult and demanding guests who require “special assistance.”

It’s a lot easier to get banned from the The Plaza Hotel than you might think.

The hotel has a strict anti-discrimination policy, and zero tolerance is given to guests who mistreat the staff because of race, gender, age, or creed.

Even now, guests sometimes request that staff of a certain ethnic extraction not be allowed to service their rooms; others will ask service members if they are legal in America.

The refusal of services goes all the way up the ladder to DVs.

At least two specific celebrities are permanently banned from The Plaza.

The first is a pop diva expelled for excessive drug and alcohol use and a belligerent attitude towards the staff.

The second is a sitcom star who took his anger issues out on a suite’s worth of furnishings.

[Optional] Would you have banned them?