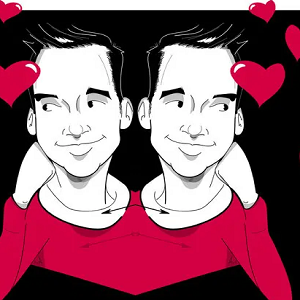 [Blind Gossip] There are so many curious things about this famous man’s relationship that it is hard to see the logic in what he is doing.

However, if you compare his relationship to that of another famous man, it actually begins to make more sense.

There is a lot of speculation that since the man in Couple 1 now knows it was his own girlfriend who betrayed him – and not some vast international conspiracy – that his breakup with her is imminent.

Not only that, someone who knows him well says that his relationship with his girlfriend is eerily similar to another famous couple that has been in the news a lot lately.

Their dynamic is almost identical to [Couple 2].

He is completely c*nt struck by her.

She has been setting him up from the beginning to distance him from his family and accept that she is IT. She has convinced him that she is the only one looking out for his best interests and everything she does is to help him. Everyone else is the enemy. She is the only one who could help him escape his former life and feel alive and help him craft his future and help him fulfill his potential and have a happy life.

You would think that a man who went to great schools and had a family that cared about him – and who is richer than most of us common folk will ever be – would be smart enough to see through this manipulation.

She has always been a schemer and a climber, so it’s not like schools and family and money could have protected him. He is dumb in love. He believes her when she says that everything bad is someone else’s fault and it’s his job now to protect her and their relationship from all the haters.

This does sound similar to [Couple 2]. Any hope that he will come to his senses?

There is a serious legal situation that could potentially wake him up to what she’s done and help him finally realize that he got played. The problem is that he’s really invested in her at this point, so his actions might not be   logical.

Couple 1 is dating. Couple 2 is married.

While the men in both couples are rich and famous, the man in Couple 1 is more well-known for his business.

The man in Couple 2 is more well-known for his family.

[Optional] What is the fate of each couple?