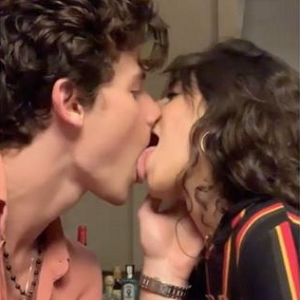 [Blind Gossip] We told you that this young actor’s last girlfriend was a publicity set up for a movie they were doing together.

It was a mutually beneficial “relationship.” It gave him a girlfriend for an extended period of time and it gave her publicity at the beginning of her acting career.

You might be thinking that her famous family would have given her all the publicity she needed to lock in an acting career, but no. She needed a public tonsil exam from another rising star for that to happen, and Tonsil Guy was happy to comply. No matter how awkward that was.

Sure enough, after the movie was released and awards season was over, there was no more need to keep the relationship going, so Tonsils and Famous Family Girl “broke up.”

Hollywood is pretty much shut down, so why is Tonsils now playing kissy face with an actress from Down South?

That answer may lie in another film that has not yet started production!

It’s a semi-biographical tale in which Tonsils will play the lead.

She really, really wants the part of his wife.

Aha! So this might all be about a role. This couple is now beginning to make a lot more sense.

It would actually make a good Hollywood story if that happened.

The two of them are dating… he suggests her for the role… the director thinks she is perfect… and our couple spends the next couple of years together making the film, promoting the film, attending other premieres together… and exploring each other’s tonsils!

Our Down South actress has a history of dating famous men. She’s gone through several in the past two years. Prior to that, a famous Aussie actor dumped her after he got tired of her calling the paparazzi whenever they went out. Annoyed Aussie likes being a celebrity, but he didn’t like being set up for photos without his permission.

Back to our current couple.

At this point, we don’t know if South is using Tonsils, if Tonsils is using South, or if there is some mutual using going on.

This should all become more clear after the casting of that bio pic.

In the meantime, just know that South is the one calling the paps for those kissy photos.

Similar: She Made A Second Move On Kanga

[Optional] Do you think South will get the part? What do you think will happen with this couple?

Previous Post: « The Filth Of Secrets And Lies
Next Post: When The Parent Wants To Be The Star »