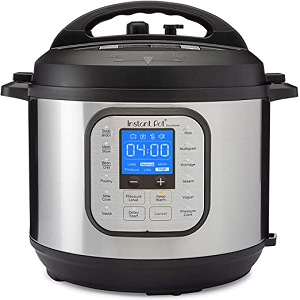 [Blind Gossip] This celebrity couple was at home with the family on Thanksgiving.

They were cooking a holiday dinner together in the kitchen.

Perhaps as an early Christmas gift, the husband had recently purchased a pressure cooker for the wife.

Yes, we know. How romantic!

It seems that Wife wanted to use the pressure cooker to cook part of the Thanksgiving meal.

For some reason, the couple got into fight over the device and the operating instructions.

They were outside their house yelling at each other. I couldn’t hear every word they were saying, but it was about the pot she was holding.

He was saying, “Why don’t you just give it to me? I’ll read the instructions! I’ll do it!”

She was saying, “No! You got the wrong one! If you got the one I told you to get, I would know how to work it!”

It seems that she had wanted a specific appliance called an Instant Pot. He had purchased a regular pressure cooker instead.

He kept insisting he would do it and she was yelling, “No! You can’t even make toast, you idiot! I’m not going to let you blow up the house with this thing!”

Then she went to the end of the driveway and put it in the trash bin. He threw his hands up in the air and they both went back inside.

I was kind of tempted to go fish it out of the trash but I didn’t want them to see me do it, so I didn’t. Seems like a waste, though!

The couple has been married for more than five years. They are both actors – TV and movies – and are normally amiable and funny with each other and their fans.

They did have a considerable personal setback this year, so perhaps the marriage has become a bit of a pressure cooker and the argument was just allowing them to blow off a little steam?

[Optional] What gift are you hoping for this holiday season?