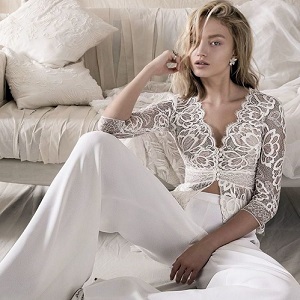 [Blind Gossip] This female singer was at the Billboard Music Awards. After the awards show was over, she changed outfits for the after-party.

Someone told us an amusing story about her outfit.

[Singer] heard that Meghan Markle was going to wear [Designer] at her wedding, so she asked [Designer] make her a “deconstructed bride” outfit for the BBMAs. She was all ready to tell this story about what a crazy coincidence it was that she and Markle were both wearing white outfits from the same designer on the same weekend. She thought the media would do side by side comparisons of her outfit to Meghan Markle’s and her relationship to Meghan Markle’s and people would talk about when she is getting married, etc.

Yeah. None of that happened.

Basically, she was looking to capitalize on the attention around The Royal Wedding to get some publicity for herself. Her plan didn’t work because Markle chose to wear the dresses of two other designers!

Although Singer’s plan was blocked this time, we have every confidence that she will keep pushing the whole engagement/wedding story until she actually has that rock on her finger.

[Optional] Do you think Singer will wind up marrying her current beau?