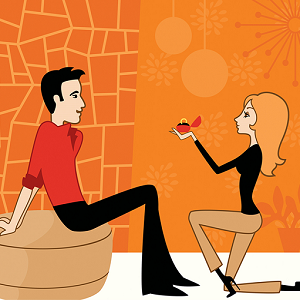 [Blind Gossip] This actress has been dating her boyfriend for well over a year. They appear to be in a committed relationship.

She is ready to take their relationship to the next level.

However, her friends are trying to talk her out of it!

He’s a commitment phobe so she wants to propose to HIM, possibly on Valentine’s Day.

Apparently, Actress thinks that her boyfriend is just afraid to take that final step, so she wants to take the initiative and do it for him.

He’s a good guy and we know she really loves him but we think it would be better if she just waited for him to propose.

So we’ve got a man who is commitment phobic… versus an actress who is ready to go… and willing to take the initiative to push this relationship down the aisle!

This could be a stressful Valentine’s Day!

[Optional] Should women propose to men? Should Actress propose to her man?