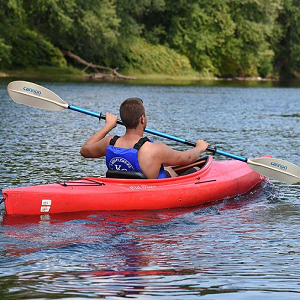 [Blind Gossip] While everyone is busy congratulating this actress on her latest engagement and pregnancy, the story of how all this happened isn’t quite so nice!

She had only been married a couple of weeks to [Husband] when she began cheating on him with [New Fiance].

Yikes! She really left him up a creek with that sneaky move!

She kept saying that it was a really intense project and that’s why she need to spend so much time with [New Fiance]. [Her Husband] trusted her because they had just gotten married. Now he is kicking himself for being so stupid to believe her.

It’s interesting that the press has been so gentle and congratulatory on her new relationship without questioning the timing or the overlap with her marriage.

She comes across as this really nice, gentle person, but she actually is a lying, conniving witch. She gets a lot of mileage out of playing the “poor widow.”

That’s a reference to yet another previous relationship. She dated a famous actor who is now deceased. They never married, but they were together for several years and had a child, so many people assume that they were married.

Now that [Husband] looks back, he should have realized that she married him just a couple of months after breaking her engagement with a different guy. That should have told him something about her character.

In case you are keeping score at home, this is our actress’ third engagement in two years!

What kind of person does that?

[Optional] Do you think she will marry her New Fiance? 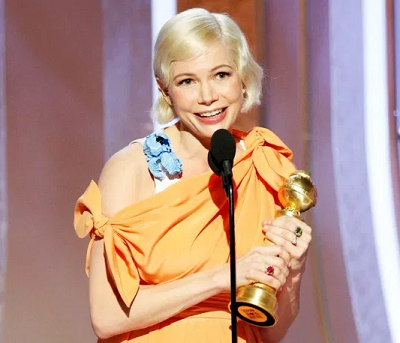 She has been nominated four times, but has never won.

To that end, she is going all out on buffing up her image during this awards season.

That “buffing”, however, involves a jaw-dropping amount of hypocrisy, misdirection and general B.S.!

As the old saying goes, you can’t have it both ways. Either you’re commodifying personal experience and loss for an Oscar or you’re not. It’s a choice, a devil’s bargain, one clearly hard to resist.

The Oscars aren’t really about rewarding the best performance or film of any given year.

Your friends at Blind Gossip have told you that many, many times!

It’s always down to the other story any given nominee is telling. And that other story — “I’ve suffered, I’ve grown, I’ve overcome an illness, a death, a divorce, I didn’t just show up to work but did so under great duress and still turned in an amazing performance” — ultimately wins the award.

Actress Michelle Williams refused to talk about her late ex-boyfriend Heath Ledger for years — but that changed in 2010, when she was campaigning for “Blue Valentine,” breaking her silence to ABC’s “Nightline.”

Then she quickly went to The Daily Beast, complaining that ABC duped her. Her people-pleasing nature, she said, had been exploited by evil news producers.

“I am still such the good girl,” cawed Williams, who had been working in Hollywood since her teen years and well knew her way around an Oscar campaign.

“The way they edited the piece . . . it appeared as if I were breaking some kind of silence and sitting down with the express purpose to discuss something that is very private to me.”

She was! She did! And ever since, her public persona has been the fragile Widow Ledger, one she now plays into on social media with her best friend, Busy Phillips.

Here’s Michelle Williams – a.k.a. The Fragile Widow Ledger – with the late Heath Ledger. Williams and Ledger had a child together but never married. 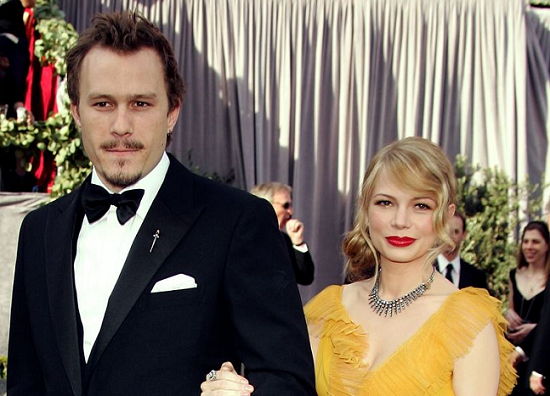 And here is Michelle Williams with best friend Busy Philipps. 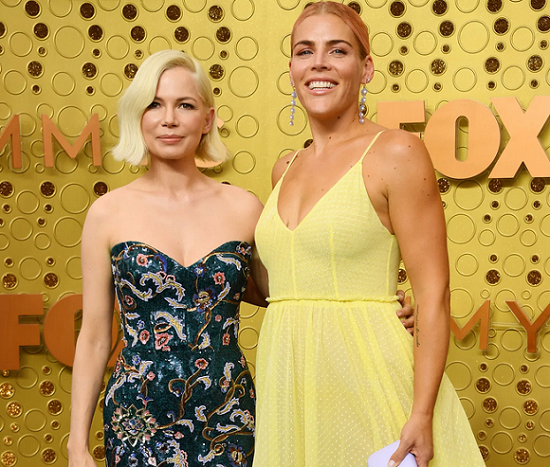 Most recently, Williams leveraged yet another aspect of her personal life, going to People magazine days before the Golden Globes to soft-pedal the timeline of her new romance and pregnancy, which contained two inconvenient details: She was married to another man as recently as last year, and her new fiancé happens to be her director — who was married to another woman at the time.

Upon accepting her Golden Globe two weeks ago, a visibly pregnant Williams launched into a tearful speech about a woman’s right to choose, alluded to having had an abortion in the past, then urged women to go out and vote.

That was one weird, WTF moment, as it had nothing to do with her role.

It was a stunning example of what such hypocrisy can do. Williams’ speech had no tether to the role for which she won, as dancer and choreographer Gwen Verdon.

It was an attempt to hijack and distract from a messy romance that threatens her well-crafted image. And one can see why she did it, because this is what happens when a movie star keeps moving the goalposts of what is and is not up for public consumption, of what they’re willing to sacrifice for an award.

Remember when she walked around New York for a couple of years with Jason Segal and her daughter like they were a little family? 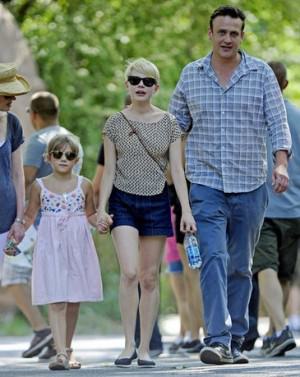 That did not end well.

Anyway, let’s focus on just the past two years!

Here she is with Thomas Kail, her director on Fosse Verdon, her new baby daddy, and her new fiance. 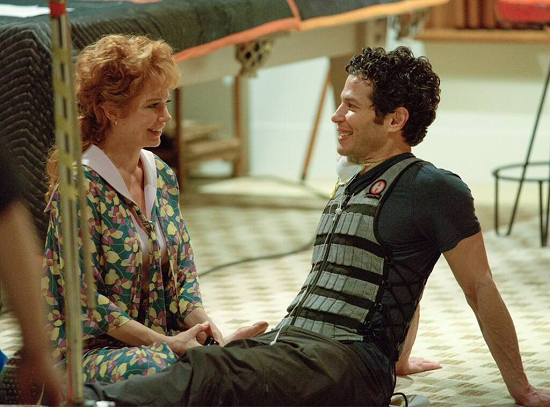 That’s three engagements in two years… and an awful lot of overlapping!

So, yes, her Public Relations team had to work overtime to bury that messiness and create a completely different narrative for Michelle Williams in order for her to win the Golden Globe.

We’ll see if their PR strategy of misdirection and sacrifice and loss and I’m-such-the-good-girl and abortion tears and widow-pity pays eventually pays off with an Oscar!

Did you catch the “up a creek”/Dawson’s Creek clue? 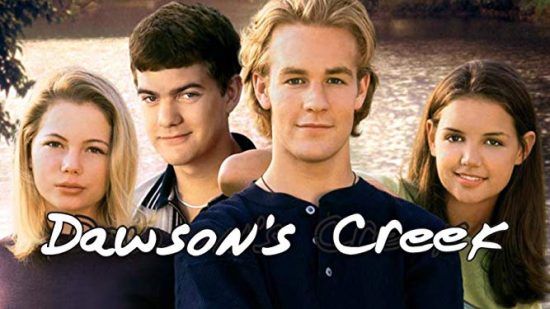 If you did, James Van Der Beek, Joshua Jackson, and Katie Holmes say, “Good for you!”

Do you think Michelle Williams’ PR strategy is a good one? Do you think she will eventually win an Oscar?