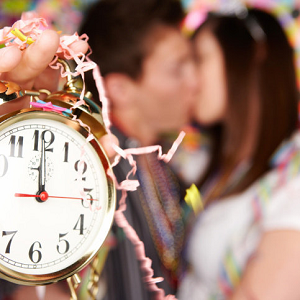 He was at a private party. When the clock struck midnight, our movie star commemorated the New Year by passionately kissing a pretty girl!

I don’t know who she was. Very pretty. Light brown hair. Not a celebrity, but looked like she could have been a model or an actress. She was about 21 or 22. She seemed to be really into kissing him, too. Somebody took a photo of them kissing and he asked them to send him a copy.

So far, so good. Who wouldn’t want to ring in the new year with a passionate kiss like that?

After that, he was hitting on up on some young, muscular guy. He was in really good shape. He looked like he might be a personal trainer.

He was rubbing up and down his arm. Then he was rubbing his back. They had a drink and then they left together.

So… was the midnight kiss was just for show and for a photo? Or is our celebrated actor bisexual?

But it sounds like he had a Happy New Year!

[Optional] Best guess as to what was going on there?