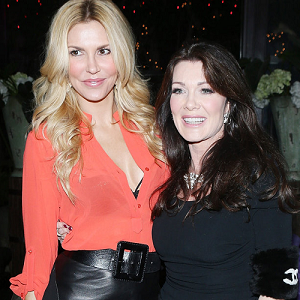 [Hollywood Life] Brandi Glanville, 47, teased some major changes could come to Real Housewives Of Beverly Hills, as one of the stars could quit amid claims they’re refusing to film.

“I don’t know if we’re going to ever see one of the housewives ever again,” Brandi revealed to HollywoodLife EXCLUSIVELY on Dec. 4 at the launch of Glow Recipe’s newest clean product Banana Soufflé Moisture Cream.

Of course, if there’s anyone who knows how extreme circumstances on RHOBH can get, it’s Brandi.

The reality star first appeared on the Bravo series in season two and remained a cast member through season six.

After taking a break from the show, she was spotted filming with Kim Richards, 55, and will subsequently make her return for season 10.

“I am back and I’m stressed out,” she confessed. “You forget how stressful these things can be, and they really are silly.”

Brandi, who lives with psoriasis, even shared that the stress is affecting her skin! “My skin is super sensitive and I haven’t had a breakout in like a year, and all of a sudden, shooting the show again, my whole face has it all over.”

Brandi, who hasn’t shied away from confrontation on the series, went on the explain that the stress is really the most difficult part of being back, even though she’s trying to “stay calm.”

The celeb continued to share, “I’m not going to, like, react the way they think I’m going to react, and then boom. I’m like, ‘Dang it. Why?’ But I wouldn’t be true to myself if I was reserved,” she shared.

As for season 10, Brandi guaranteed more drama! “The show is definitely not boring at all,” she shared.

Season 10 will also feature one less housewife, as Lisa Vanderpump, 59, announced her departure in June 2019.

[Optional] Which is your favorite Real Housewives show? Or are you over the whole franchise?