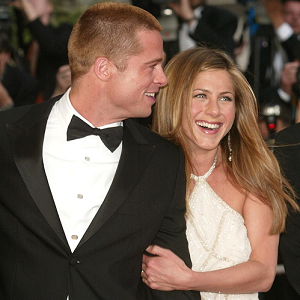 [Blind Gossip] While the reunion between Brad Pitt and Jennifer Aniston at the SAG Awards was covered in great detail, there was another encounter that was also noteworthy!

This actress, whose name is well known to you, was paying Brad Pitt an unnatural amount of attention. Our Actress was at the event because she or her project were nominated this year.

When people greet each other at these events, they usually go up to each other during a break and say a quick hi, chat for a few seconds, and then go back to their seats.

She was totally laser focused on him! She went up to him once and talked for one or two minutes. I could not hear their conversation. He was sitting down and she was leaning into him (with her cleavage in his face).

The next break, she went back up and talked to him AGAIN. I couldn’t hear what she was saying but this time he was standing up and she was rubbing his arm up and down. It looked very flirty.

That wasn’t the end, either!

The next break, she got up and went over to him AGAIN! This time I could hear the conversation. She was asking him what party he was going to, what his travel schedule was, did he have time to get together for lunch or dinner?

How did he respond?

He was polite about it but definitely wasn’t into it. (“Oh, thanks! That’s so sweet of you to ask! Unfortunately…”) Then he said he had to go talk to someone else and walked away. He was clearly blowing her off, but he was very smooth about it!

What happened to Actress?

She went back to her seat. Someone at her table asked, “Well? Well?” She just shook her head no. She looked pissed.

Similar: She Is The Good Person

[Optional] Would you date or faux date Brad Pitt? Who do you think Brad should date?