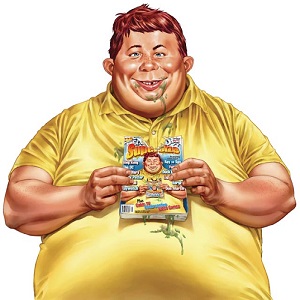 [Blind Gossip] You’ve seen this rotund celebrity on TV many times, either on his own show or as a guest on other people’s shows.

He has enjoyed a long run of accolades and awards, both inside and outside of his area of expertise.

Not so much any more. It took a while, but those assault accusations are finally catching up to him.

Not only are his former colleagues distancing themselves from him, but so are the institutions that formerly lauded him as a shining example of success.

The college he attended used to regularly cook up ways to honor him.

They regularly featured him in their alumni magazine. So much fun to cover!

They even inducted him with great fanfare and multiple press releases into their Hall of Distinguished Alumni a couple of years ago.

That was apparently another half-baked idea.

He was just removed from the Hall. Guess they realized it’s not very funny or distinguished to celebrate alumni who drug and assault the women that work for them.

No press release for that little event.

Similar: She Was Swirling In Vegas

[Optional] Who is the most well-known alumni from your school?