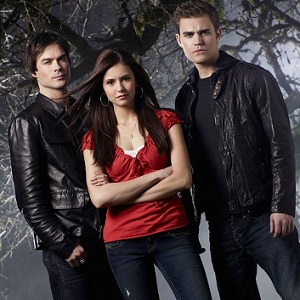 [The Hollywood Reporter] Elisabeth R. Finch opens up about how women, including her former showrunner Julie Plec, have the power — and willingness — to create change.

I’m three minutes into a rehearsal on the first day of my episode of The Vampire Diaries when I notice an actor is missing. I immediately know something is wrong. Rehearsals simply don’t go on without actors, and this one in particular is never late, never unprepared.

I stand quietly for a moment considering my next move. I’m the writer and on-set producer of this episode, so I know it’s up to me to discreetly pull the director aside to carefully try and correct this mistake. I want to tell him straight out: “You forgot to include an actor in this scene. And he has to be here.” But I’m a low-level writer. I don’t have the experience or guts to be so direct.

Instead, I look at my script, bite my lip and walk a tightrope with every word I choose: “Can we include all the actors in the scene as scripted please? Maybe you have different plans I’m not familiar with, but I worry the plot won’t make sense without him. …” The director’s face turns crimson with rage, his eyes dart around the room, quickly assessing how he can use the private space I’ve put us in to his advantage.

I immediately assume I’ve made some career-ending mistake, and I try to buy it back by apologizing. But he stares me down, spit forming in the corners of his mouth as he screams: “If I wanted to talk to a nagging c*nt, I’d go home to my wife.”

My arms instantly go numb; my feet feel nailed to the floor as that sentence hangs between us. Then he smiles, gently brushing his hand down my cheek and pinching it. Hard. He walks away, cool and collected as he asks his assistant to invite the missing actor to set. “Anything for our Finchie,” he laughs. And I laugh back.

I laugh for every damn day of that shoot. Laugh through his lewd jokes about actresses’ bodies and lingering hugs and clammy hands on the back of my neck, giving me massages I never want but allow anyway. I laugh and allow it because I don’t want the reputation of being “that girl,” because surely other people have it much worse so I should be able to handle this, because maybe just maybe my plaintive smiles give him permission, because somewhere along the way I internalized the misguided notion that this is “the price you pay” — because of a million reasons that all boil down to: I worked my ass off to get this job. I don’t want to lose it. So I keep my mouth shut.

After the very last shot of my episode, I walk off the sound stages, out of earshot, and scream bloody murder into the dark Atlanta sky. Just as I’m done shaking and shouting and allowing myself to feel all the rage I denied myself for two weeks straight, I bump into my boss, Julie Plec.

Over the course of my first season, Julie has become more than the showrunner, she’s my mentor, my friend. But in that moment, she’s the last person I want to see. I try to smile and hurry off to my rental car, but she can tell I’m shaken. She asks how the episode went.

“He was … not nice. He said some … not nice things to me. As a woman. But, hey, we got it done. I think we got what we needed.” I try to soften it, make it seem like I handled it all. I assume she’ll be proud of me.

Instead, she starts yelling. She tells me I was wrong. Wrong to assume that my job is to just suck it up and pretend it’s fine. Wrong not to tell her on day one. In that moment, I understand she’s not yelling at me. She is not shaming me. She is clear. And unwavering. And wants to be sure I hear every damn word when she says: “It is not your job to take abuse or accept unacceptable behavior because you’re young and a woman. That is not your job.” There is no judgment or blame in her voice, only strength and certainty. And it’s because of that strength and certainty I hear her, I believe her. I nod, thank her perfunctorily. And then I walk away. When my hands put my keys in the ignition, I notice they aren’t shaking anymore.

A month after my episode of The Vampire Diaries wraps, Julie emails to invite me back for the next season. At the end she writes: “I promise never to put you in the same room with [that director] ever again.” She never did.

One woman is enough.

[Editor’s note: Finch did not lodge a formal complaint at the time of the incident. The director, whom she declined to name, did not work on The Vampire Diaries again.]

[Optional] If the director had said/done those things to you, do you think you would have reacted differently?