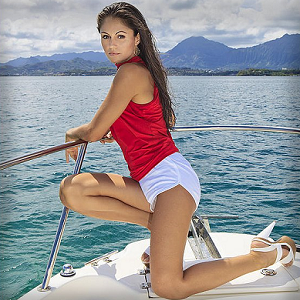 Let’s talk about his relationships with three women.

While they had more than one child together, he never did marry his Baby Mama.

His lack of sobriety made him an interesting partner for reality show purposes but a poor choice as a lifetime partner.

The messiness continued with his last girlfriend. She was way too young for him, but she was pretty and came from a famous family, so it filled his need for social media attention.

While she was devastated by the breakup, her parents were relieved to get that creepy addict out of their lives. They were so worried that she would marry him. They hope he is gone for good.

His current girlfriend is… problematic.

She is model pretty and has dated other celebrities, but he may be overlooking one really important fact about her.

She is a yacht girl.

Now, his last girlfriend used to party on yachts, but she was not a “yacht girl.” There is a distinction.

This new girlfriend is yacht girl.

Is this really the kind of girl he wants to bring around his children?

[Optional] If your daughter wanted to date him, what would you do?