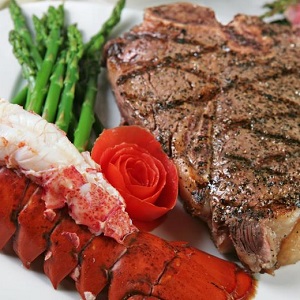 She provides their meals while they are working, but does not go overboard about the menu.

[The Singer’s] family and guests eats really well. The staff eats separately. It reminds me of when I worked at restaurants where the staff gets a “house meal”  or a “family meal.” It’s not bad, but it’s definitely not gourmet food. It’s just cheaper food like spaghetti or tacos or hamburgers.

One day the Singer announced that she was going to treat the staff to a special meal.

She had been raving about some dinner of filet mignon and lobster that she had eaten and said that it was so awesome that she was going to treat us to a “surf and turf” next week. It may sound funny, but we were super excited! We talked about it all week!

The cook sent one of the staff shopping for the meal and the fixings.

We knew we probably weren’t going to get filet mignon and lobster, but that’s okay. They got big packs of ribeye steaks, crab cakes, potatoes, asparagus, baby greens for a salad, etc.

Sounds great, right? Well, it was until the Singer saw the food.

[The Singer] took one look at all the food and said, “Are you kidding me? Are you crazy? I’m not paying for that!”

She made the staff person return the asparagus and the ribeye steaks and crab cakes… and buy frozen peas, frozen fish sticks, and a single London broil that would be sliced up and shared among the hungry staff.

Well, we did get a couple of slices of steak and fish sticks, so technically, we did have surf and turf. It just wasn’t the meal we were dreaming about!

[Optional] Best meal you ever had?