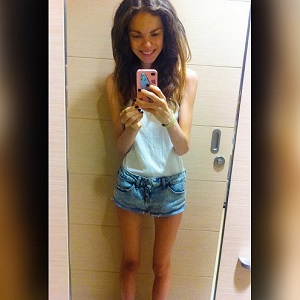 While the media may describe her as “genetically blessed” with a thin frame and good looks, the truth is much sadder. While she does have very attractive celebrity parents, she is definitely not eating enough.

It’s been drilled into her head since she was little that in order to be successful, she has to be thin. She counts every calorie. Monday through Friday the limit is 1000 calories a day, Saturday and Sunday it’s 1200. She keeps track of it on her phone. She is very disciplined about it. She will sometimes eat just for the camera, but then she immediately gets rid of it once the picture is taken.

We don’t know if “gets rid of it” means that she disposes of the food after a bite or two or if she is purging. Either one is sad and may indicate an eating disorder.

It’s unclear if her parents are even aware of her food and diet issues. If they are, we don’t know if they are encouraging it or are worried about it. Trying to make her into a successful model certainly does seem to be an awfully big priority for them!

[Optional] Does the daughter look healthy to you?