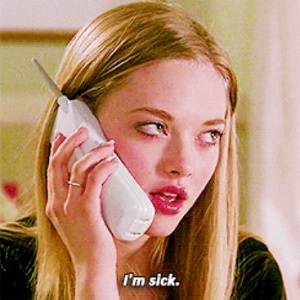 [Blind Gossip] There is a funny scene in Mean Girls in which Karen (played by actress Amanda Seyfried) claims illness in order to stay home.

She gives a little struggle cough and says, “I’m sick.”

That is close to what went down a week or so ago in the lives of this famous and feuding family.

The Mother In Law was supposed to attend an event for the first time with her Daughter in Law.

She must have been seriously ill, right?

[MIL] had a mild cold, but the woman has the constitution of a horse and it was nothing that would have ordinarily kept her from attending a scheduled event. Did you know that [MIL] was actually very sick the day of her own wedding? Yet she muddled through with nary a complaint.

Guess DIL isn’t the only actress in the family!

So why did MIL really stay home?

[MIL] has worked incredibly hard over many years to fortify her own position within the family. She was very gracious and welcoming with [DIL] in the beginning. However, she – and other family members – now find it distressing that DIL seems to be more interested in destroying the family than in joining it.

It would not behoove [MIL] to do photo ops with [DIL] unless part of an event with many family members. Perhaps that will change in the future, but for now it seems prudent for her to keep a bit of distance.

While initial reports were that MIL would be down for a week or more with such a serious illness, she made a miraculous comeback!

Only a couple of days later, MIL attended an event at which she was surrounded by multiple family members… and did not have to do an individual photo op with Daughter in Law.