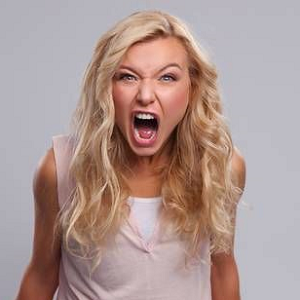 [Blind Gossip] We’ve written about this actress from a famous family several times in the past.

It was usually about her foul temper. She used to be engaged to an actor with whom she worked. He became the target of her screaming fits and fisticuffs.

It wasn’t until after she got arrested that he finally came to his senses and decided that their relationship was too much of a horror story to continue.

They both moved on.

Unfortunately, our actress’ reputation continued to follow her into her next relationship with a different actor.

It seemed like a perfect situation, apart from that foul temper of hers.

Then we recently heard a rumor that she was back to her old ways with her new boyfriend… and had actually knocked out a couple of his teeth in a vicious fight!

Except… it isn’t true.

She did not punch him in the face during a fight.

And, despite any photos you might see, we can assure you that our actor’s handsome face is completely intact and that he still has all his teeth.

It’s a good thing, too, that the rumor isn’t true.

Why? Because that would be a terrible start to a major upcoming life event.

You see, our actress is pregnant with the new boyfriend’s baby!