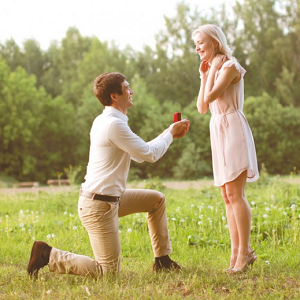 [Blind Gossip] This couple, who met on TV, are deeply in love.

In fact, their love is so profound that their relationship actually shook up the way a popular TV show is supposed to work!

That disruption notwithstanding, we should be happy that they found each other and are now engaged, right?

Declarations of true love, a marriage proposal on one knee, and a beautiful engagement rings are great… but what if things are not what they seem?

A few weeks ago, our hunky man went out on a date.

It was not with his new fiancee. It was with another woman!

They went to the gym together and then headed out to eat after at some place nearby in [neighborhood]. He spent most of the date talking about himself and his plans for a career on TV. 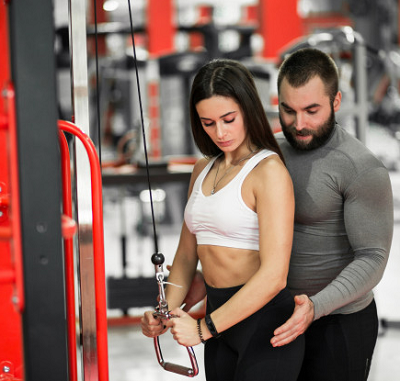 That does not sound like the most exciting date.

She did say that there was some kissing and a little heavy petting at the end. However, he was so incredibly dull that she didn’t want a second date.

Again, this date happened just a couple of weeks ago.

So, that leaves two possibilities: Either the TV relationship has already ended. Or he is cheating on his fiancee!

[Optional] Will this couple make it down the aisle? What do you think is going on? 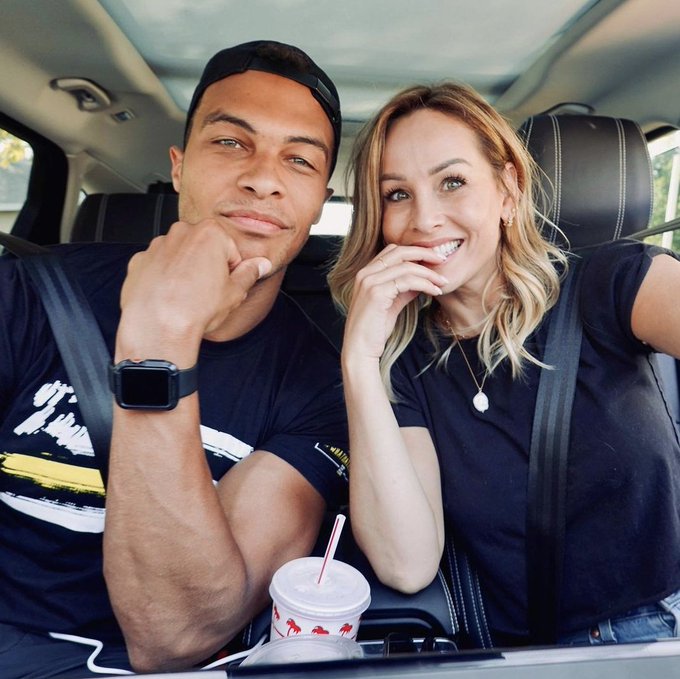 Couple and/or TV Show: Clare Crawley and Dale Moss from The Bachelorette

Bachelorette stars Clare Crawley and Dale Moss broke up this past weekend!

As you may recall, the pair wreaked havoc on the 16th season of The Bachelorette.

Clare Crawley decided by the fourth episode of the season that she was in love with one of the contestants, Dale Moss.

Instead of going through the process and completing the season, the couple immediately got engaged and left the show.

A new Bachelorette, Tayshia Adams, was then substituted in for Clare Crawley and the season continued. 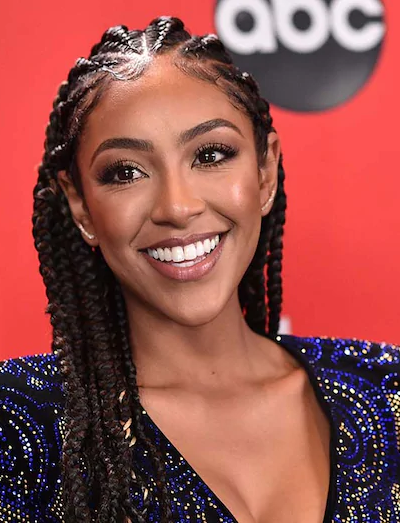 Unfortunately, while Moss did get down on one knee and propose to Crawley, that does not mean that their relationship was on solid ground. 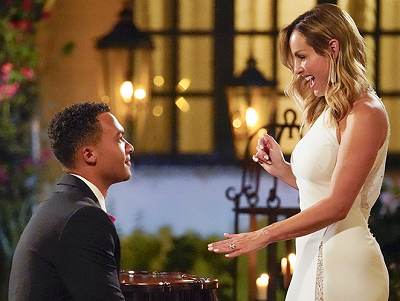 Your friends at Blind Gossip told you that Crawley and Moss’ whirlwind relationship began experiencing problems right after they left the show.

Despite the diamond engagement ring and romantic proposal, Dale Moss was much more interested in becoming famous than he was in becoming a husband!

While Clare Crawley was talking about a wedding and babies and houses, Dale Moss was focused on a career on TV.

Moss loved the cameras and would tell the paparazzi where he was going to be so they could snap him at his most photogenic. 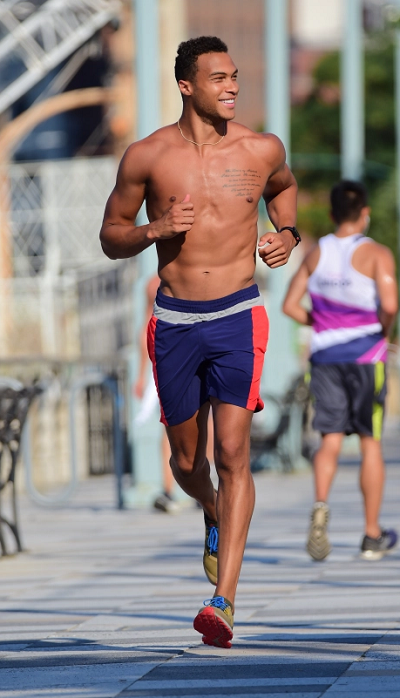 In addition, while he happily participated in any photo op that would bring him publicity, he behaved very badly when he wasn’t in front of the cameras.

As soon as he got engaged… he started dating other women!

Of course, the paparazzi were not notified of those encounters!

We detailed one such encounter for you – which took place in New York City – that included kissing and heavy petting, but we hear that there were others.

It was just a matter of time before the Crawley/Moss relationship fell apart.

The couple broke up a mere two months after getting engaged!

The Bachelorette’s Clare Crawley and Dale Moss Break Up

Maybe he wasn’t the one after all. The Bachelorette’s Clare Crawley and Dale Moss have called it quits two months after their engagement aired.

Last year, the reality stars were quick to get engaged in episode four of the 16th season, making way for Tayshia Adams to shockingly step in as the new Bachelorette.

Clare said she knew early on that Dale was the only guy for her. She told the show’s producers, “I am so far in love with Dale. We have this connection where it feels like I’ve known him forever. It’s that intangible chemistry that you just can’t make up and you can’t replace.” 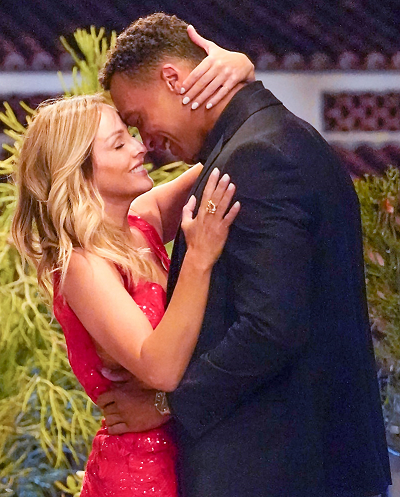 The former football player clearly felt the same way, admitting, “I’m falling in love with you through this process. I’m not afraid to say that at all. My heart is open and I’m not gonna fight that.”

Not long after Clare and Dale got engaged, she was already hinting at plans to grow their family, declaring, “Babies are on the agenda.”

She shared on the Nov. 10 episode, “We’re just happy to, like, start our lives together and to get to know each other more, and more and more.”

The truth is that they rushed through their relationship so quickly that Clare Crawley didn’t know that the real Dale Moss is a lying, cheating, fame-seeking dog who is really only interested in his television career and being famous.

Here is the obligatory statement from Dale Moss:

I wanted share with you all that Clare and I have decided to go our separate ways. We appreciate the love and support we’ve received from so many people, but this is the healthiest decision for both of us at this time.

We strongly believe in leading with love and always remaining true to oneself – something our families have taught and instilled in us throughout our lives. We only hope the best things for one another.”

Supposedly, Dale Moss is the one who broke things off.

And Clare is upset. 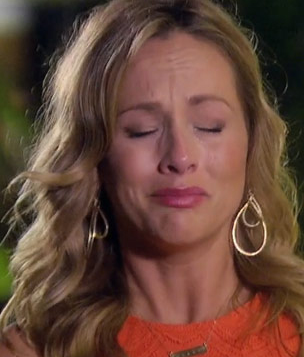 A source tells E! News that Clare Crawley is heartbroken by Dale Moss’ decision to end their brief relationship. As the insider puts it, “She’s trying to focus on herself right now but is completely devastated.”

The insider shares that Dale officially “broke it off” with Clare after realizing he wasn’t ready for the level of commitment she was asking for.

“Clare and Dale were taking time apart and we’re working it out, but it led to a definite split,” the source explains. “Dale felt that he is not ready for marriage and was not ready to move to Sacramento for Clare. They were making a lot of plans that Dale could not commit to.”

The insider also adds that Dale “didn’t feel right” about the direction their relationship was going and he “had to follow his heart.”

Moss is right about two things.

The upside? Clare Crawley found out who Dale Moss really is before a wedding and babies. 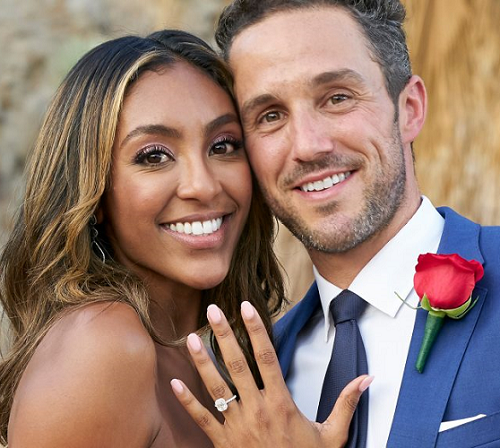 Tayshia Adams found love on The Bachelorette and got engaged to a guy named Zac Clark. Congratulations to them!

And congratulations to Loopylou600 for being first with the correct response!

Yes, Dale Moss cheated. And now we have a formal accusation and confirmation.

Clare Crawley is now accusing Dale Moss of cheating on her throughout their entire five-minute-long relationship!

Confirming their separation on Instagram Jan. 19, the former NFL athlete shared that it was “the healthiest decision for both of us,” noting they continued to want “the best things for one another.” He doubled down when approached by a reporter while out in New York City hours later, insisting that “Clare and I have a lot of love for each other.”

The split was just one of those things, he continued, blaming his and the Sacramento-based hairstylist’s packed schedules. “Honestly, we’ve just got a lot going on in our lives right now,” he explained, adding that they had every intention of remaining in each other’s orbits as friends: “Clare and I will be cool.”

Note that was his statement, not hers. They did not make that statement as a couple. 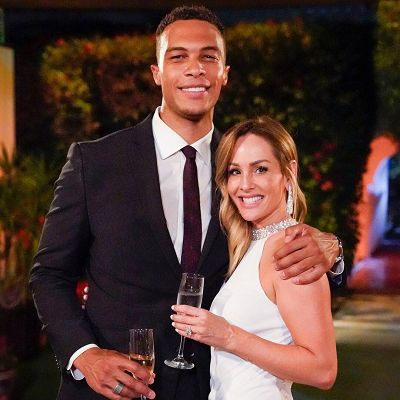 And they are definitely not cool.

Wellllllll, unless that’s some sort of hip new slang, he shouldn’t bet on it.

…Put plainly, multiple sources familiar with the situation tell E! News that Crawley believes Moss has been cheating her throughout their engagement.

He and the woman in question (E! News has chosen not to name her at this time) have been in communication since at least late 2019, but Moss insisted to Crawley, 39, that theirs was merely a business relationship. Still, “Clare has always been skeptical,” says one source with knowledge of the circumstance. “She never trusted the friendship and thought it was shady.” And as their nascent romance began to splinter, her worst suspicions were confirmed.

The first source tells E! News the woman “has been talking to her friends about sneaking around with Dale.” As for Crawley, continues the source, “she has seen proof” that whenever Moss was in New York City without her, he was with his other flame.

We do want to note that Moss actually cheated on Crawley with more than one woman.

The woman in our original blind item was just a one-off date. The business woman in the E! story is a different woman. Plus, there were others.

By the way, although E! did not name the woman in this article, it will come out soon, so your friends at Blind Gossip will save you the suspense.

Her name is Eleonora Srugo. She is a New York City-based real estate agent. She works for Douglas Elliman, a big real estate firm. 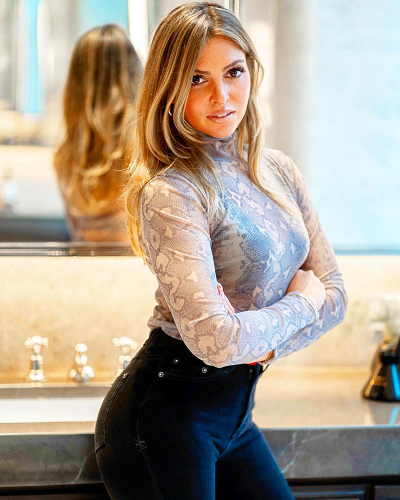 She resembles Clare, doesn’t she?

Anyway, Srugo works in New York and Dale Moss wants to work in TV, so it’s a pretty good bet that he will stay in New York.

By the way, it may not be right to pin all the blame on Dale Moss.

However, they both behaved immaturely, foolishly and impetuously by getting engaged just a couple of weeks after meeting.

It’s not exactly surprising that they couldn’t make it work.

They got back together again in February 2021.

Since then, they have attended lots of events and done a lot of photo ops.

They upped their social media game and raked in the sponsorship dollars together. 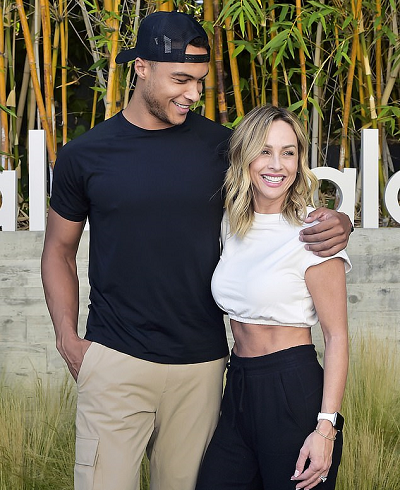 Even thought Dale Moss did not propose to her again, Clare Crawley put her engagement ring back on. Fans went crazy.

Even more people followed them on social media.

Are you feeling manipulated yet? Wait. There’s more.

Clare Crawley told stories of childhood trauma and self worth and talked about getting her giant breast implants removed. 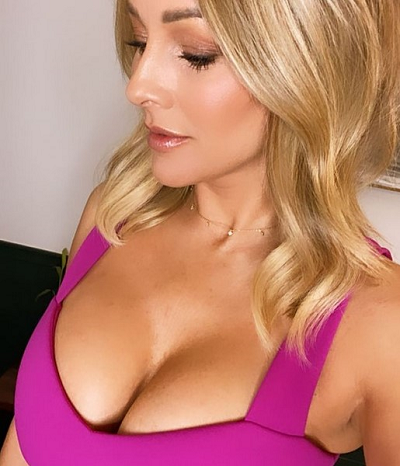 And then Dale Moss hinted around on Instagram that they had gotten engaged or maybe even married. Fans went crazy again.

Then they did more  public outings and photo ops.

Here they are two weeks ago at the US Open with other stars from The Bachelorette. 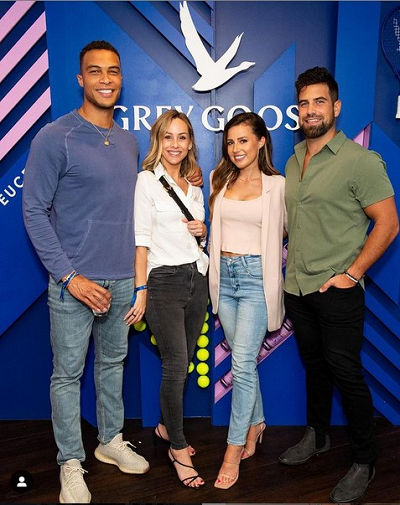 Then they broke up again.

Bummer news from Bachelor Nation: Clare Crawley and Dale Moss appear to have broken up again.

Rumors began swirling after Dale attended a mutual friend’s wedding by himself, and then Page Six reported that the couple had parted ways “for good this time,” with a source telling the outlet that they couldn’t agree on fundamental relationship issues like where to live and when to start having children.

Oh, and this news comes just a few weeks after speculation that Clare and Dale had gotten engaged or maybe even married thanks to Dale wearing a ring on Instagram Stories.

As a reminder, Clare and Dale broke up for the first time all the way back in January, got back together, and just recently celebrated their one-year anniversary.

Dale even took to Insta with a gushy post on July 28 saying, “It’s the moments that nobody sees that make life and our love so special. The most beautiful thing is that those are the moments only we will carry forever. When we first met I knew god’s hand was at work but I could have never imagined the journey he had in store for us. Love you with all my heart @clarecrawley. Happy ONE YEAR Anniversary Love!” 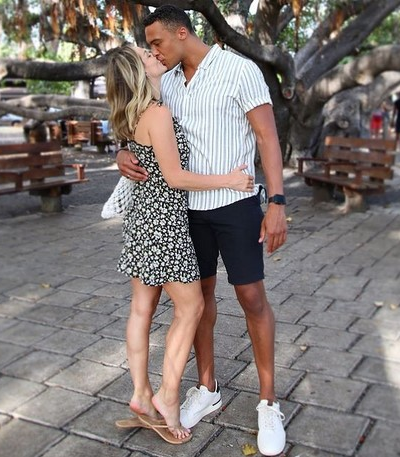 Or until they decide they need more Instagram followers and sponsors…