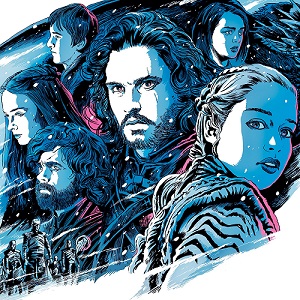 [Entertainment Weekly] When Kit Harington entered the conference room, he had no idea what to expect.

The final season’s scripts had been emailed just a couple of days earlier, sending the Game of Thrones cast into a reading frenzy. Like millions of fans around the world, the actors had been waiting nearly a decade to learn their characters’ fates. The entire six-episode season arrived at once, protected by layers of password security.

Sophie Turner flew through her copies in record time, quickly messaging the producers her reaction. “It was completely overwhelming,” says the actress, who plays Sansa Stark. “Afterwards I felt numb, and I had to take a walk for hours.”

Benioff and Weiss opened the proceedings by asking the cast to refrain from doing anything during filming or afterward that might reveal even the tiniest spoiler (“Don’t even take a photo of your boots on the ground of the set,” one actor recalls being told). And then, seated around a long table scattered with a few prop skulls, the cast read aloud the final season of Game of Thrones.

At one point, Harington wept.

Later, he cried a second time.

You know, Harington will actually reveal why he cried that second time.

“The second time was the very end,” Harington says. He’s referring to when the cast reached the last page of episode 6, and what the showrunners wrote there at the bottom.

What’s being filmed here is episode 6, the series finale. Like Harington going into the table read, I don’t know anything about the final season’s storyline. I look around at a meticulously constructed set that I’ve never seen on the show before. Several actors are performing, and I’m stunned: There are characters in the finale that I did not expect. I gradually begin to piece together what has happened in Westeros over the previous five episodes and try not to look like I’m freaking out.

BG Note: You can read the entire article here.

1. Why would Sophie Turner (a.k.a. Sansa Stark) feel numb about the finale?

2. What made Kit Harington (a.k.a. Jon Snow) cry the first time?

3. What characters would you be stunned to see included in the finale?

4. Who will win the Games Of Thrones?

[Optional] Will you be sad to see the series end?