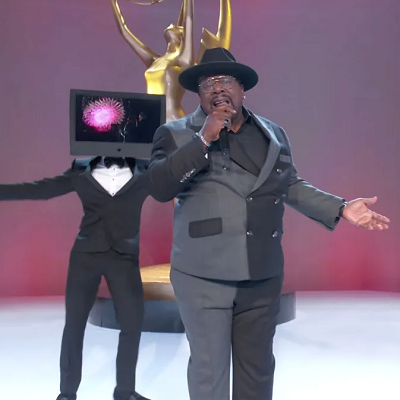 [Blind Gossip] The Emmy Awards, which was hosted by Cedric The Entertainer this year, celebrates excellence in television.

We, however, would like to talk about someone’s excellence… in tonguing their costar!

Our actor and actress are on a TV show together. One of them was nominated for an individual award. Once was not.

They were at an after party with lots of other celebrities.

For some reason, they decided to have a little private time in a corner of the party.

One of the other staff pointed out that [Actor and Actress] were in the corner, going at it like drunk teenagers so of course I had to check it out.

The staff all had to wear masks but none of the guests did so it was easy to identify who it was. It was definitely them.

They were all hands and tongues. One of the things we noticed is that his tongue action was weird. It looked like a snake darting in and out of her mouth!

Well, they are creative types, so maybe she is into that reptilian action. Anything else?

None of the other guests seemed particularly shocked that they were making out, but I was. These are two people I would have never put together in my head!

We would never put this actor and actress together either.

We don’t know if they are actually getting it on in real life… or if it was just a one-time drunk random make out session.

In any case, glad they had fun!

[Optional] Did you watch The Emmys? What did you think?