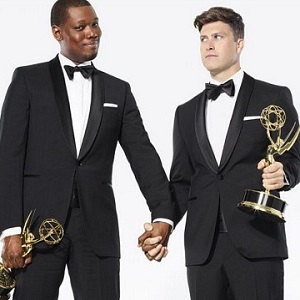 [Blind Gossip] At a post-Emmys party, these two industry types were talking about a winning project and one of the actors in that project.

They were talking about how surprised they were that [Actor] was so vocal about his girlfriend. One of them said that she thought he would not even mention her because she is a beard. The other one said, “No, it’s actually smart of him. It’s his way of doubling down on straightness!” They both agreed he would get more work that way.

Sounds like our actor won’t be kicking down the closet door any time soon.

[Optional] What grade would you give last night’s Emmys broadcast?