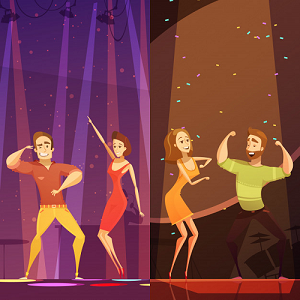 [Blind Gossip] There is a controversy surrounding a popular TV competition show.

The controversy is definitely real… but everything that you are being told by the people involved is a lie!

Want to know the truth?

This couple from the show was rumored to have had an affair. However, they both denied it and claimed that they are just friends and are actually dating other people.

Now, more fakeness. Our couple is pretending to date other people.

Why would these other people even agree to get involved with this messy couple? They have their reasons.

She loves the publicity. She actually has a boyfriend but this puts her in the spotlight, so her boyfriend is going to stay in the background while she gets publicity from this.

It has to do with loyalty and survival. The men are close friends. When the couple moved in together, he was broke and needed a place to live. They gave him their extra apartment to live in as long as he agrees to fake date her.

So, everybody is getting something.

For now, the four of them are all committed to this fakery. You can probably look forward to more misdirection, more double dates, and seeing all four of these liars coming and going from each other’s apartments for the time being.

Here’s the problem: Having all four of them dance around the truth over a long period of time is going to be difficult. Plus you have the wife who knows her marriage is heading for divorce and is talking to divorce attorneys. Oh, and the boyfriend who needs to keep his mouth closed.

So, is there a plan for the long run?

They are in love and they plan to get engaged after all the controversy dies down. She is determined to keep her reputation clean because she wants a long career on TV.

Given the shaky foundation of this relationship, we’ll see if that engagement actually happens!

Similar: This Is About A Divorce

[Optional] Do you think they will eventually get engaged?