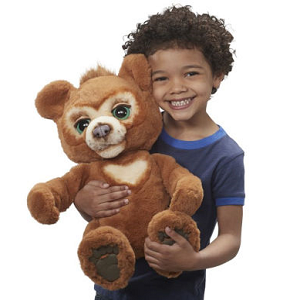 [Blind Gossip] One of the popular toys for this Christmas is an interactive stuffed animal named Cubby The Curious Bear.

Cubby can dance and play peek a boo. He even makes eating sounds when you feed him a snack.

Cubby is not the only curious little one that we want to talk about.

This celebrity couple consists of a TV star and a musician. They have a young son. Cute kid. He’s very curious little cub.

Some guy was talking to [His Mother] about houses and construction. He was saying that he and his wife were remodeling their bedroom so they were sleeping elsewhere.

Her kid piped up, “You only have one bedroom? We have two houses and two bedrooms. One for Mommy and one for Daddy.

[His Mother] shut him up real fast.

We’ve told you before that his parents don’t live together. It sounds like they might also have separate bedrooms in the home where the children live!

[Optional] What toy does your child really want for Christmas or Hannukah this year?