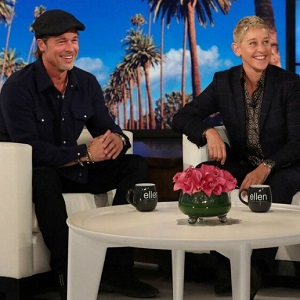 [AOL] Turns out Brad Pitt and Ellen DeGeneres have someone special in common.

The 55-year-old Once Upon a Time in Hollywood actor appeared on Friday’s The Ellen DeGeneres Show for his first guest spot in eight years.

While there, the two discussed their first encounter and the conversation brought up some shocking revelations.

“I remember a Melissa Etheridge pool party where I think you were hitting on my girlfriend,” Pitt accuses DeGeneres.

Smiling, DeGeneres replies, “Was I hitting on your girlfriend? Really?”

“I actually since then have dated another one of your girlfriends,” DeGeneres reveals. “We’ll talk about that later.”

“After the show,” Pitt says, smiling and nodding.

[Optional] Who would make an ideal wife for Brad Pitt?