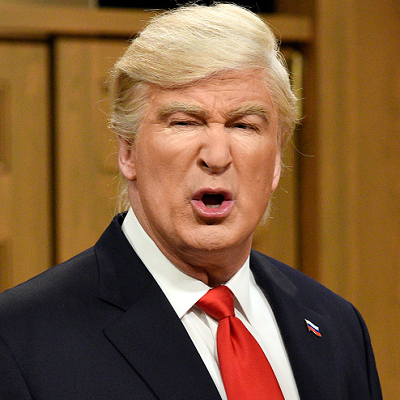 [Blind Gossip] You already know that Alec Baldwin was involved in a terrible accident on the set of his independent Western film Rust. 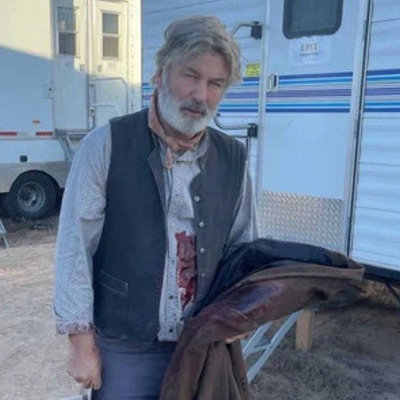 It is still unclear whether he will face criminal or civil charges in the matter involving Director of Photography Halyna Hutchins. 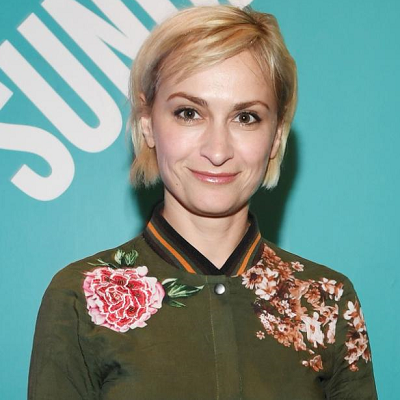 The shock of the situation isn’t stopping Alec Baldwin from talking about the incident. And talking. And talking.

He recently did a jaw-dropping interview with George Stephanopoulos. 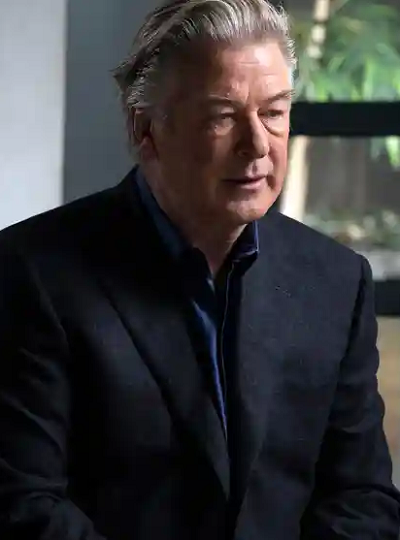 During the interview, Baldwin buried his face in his hand as if sobbing. 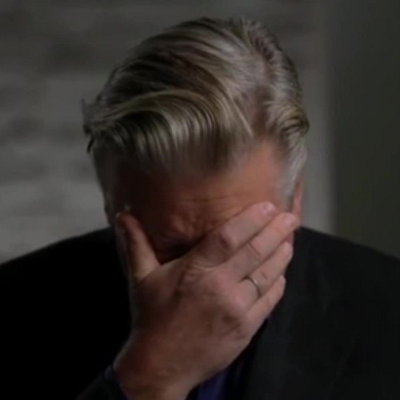 Oddly, though, Alec Baldwin said that he feels “no guilt” over the demise of Halyna Hutchins… even though he was the proximate cause of her demise.

It was all very intense and we’re not sure what purpose the interview served for him.

Most attorneys would tell someone involved in an incident like this not to do interviews while the investigation is going on.

Is Alec Baldwin trying to get his version of the story out there as the definitive version against which others will be evaluated?

Does he want people to feel sorry for him?

He is an actor, so it is reasonable to believe that he prepared and rehearsed specific answers ahead of time.

My husband is suffering from PTSD right now.

It’s something that is not just from what happened recently but he’s been suffering from this for a very, very, very long time…

Alec Baldwin has been suffering from a serious mental condition for a “very, very, very long time”? And this is the first we’ve heard of it?

Later on, Hilaria added some more detail in reference to a photographer who was taking photos of them in a public place.

My husband has ptsd, has had for a long time, now, worse than ever. Some take advantage by poking at him, trying to rile him up, messing with his mental health. It works sometimes. I try to ward it off. This is a good example. You can see his joy. We are literally telling him we don’t consent. he feels the right to violate. This behavior is NOT OK. This is an attempt to create news. Not cover news.

How and when did this PTSD begin? Hilaria does not explain that part.

Alec Baldwin has certainly always been a volatile man.

Ireland’s mother, Kim Basinger, released the recording during their custody battle. It took years before Alec Baldwin acknowledged that his behavior hurt his daughter “in a permanent way.” 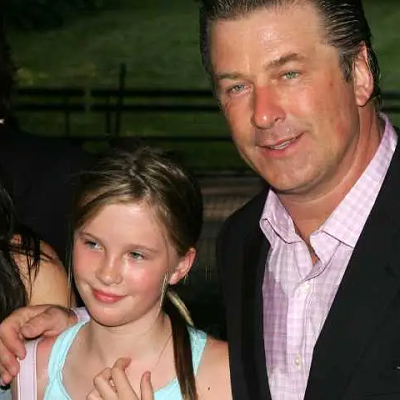 And remember when Alec Baldwin was thrown off a Los Angeles-New York American Airlines flight? He refused to turn off his cell phone during departure because he was playing a game called Words with Friends on his cell phone.

An MTV executive who was on the flight said, “On an AA flight at LAX. Alec Baldwin removed from the plane. We had to go back to the gate. Terrible that everyone had to wait.” 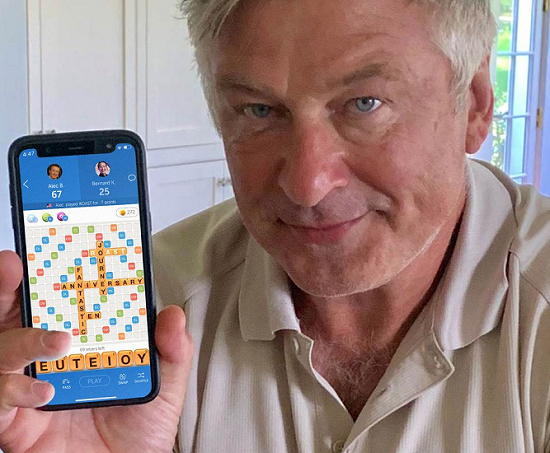 American Airlines said, “The customer was extremely rude to the crew, calling them inappropriate names and using offensive language.”

That sort of behavior is a bizarre mix of entitlement, selfishness and anger.

And remember the frequent occasions where Alec Baldwin let his fists do the talking for him?

Over the years, Alec has gotten into at least five physical fights with photographers and others. He’s been arrested at least twice.

During those fights Alec was accused of shoving and slapping and punching people. He even broke one photographer’s nose.

Here is Alec getting into one of his many scuffles. 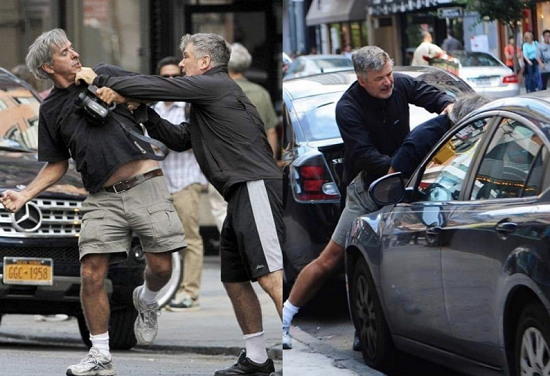 She is also getting into confrontations with photographers. She also photographs anyone who gets near them. 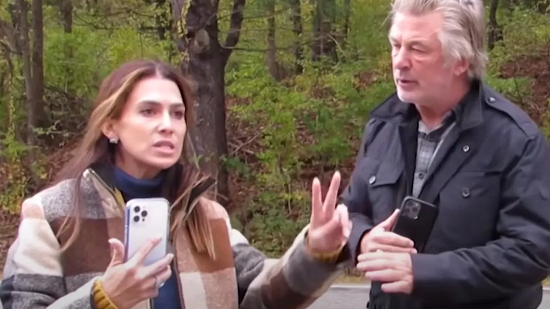 What is ironic about this is that Alec Baldwin and his wife Hilaria are constantly courting attention on social media, in the press, and on TV. Yet they are shockingly sensitive about being recognized or photographed in public places.

Let’s get back to that PTSD issue.

Post Traumatic Stress Disorder is a serious mental health condition that may include flashbacks, nightmares and severe anxiety.

Where did Alec Baldwin’s PTSD come from?

He comes from a stable, middle-class family. 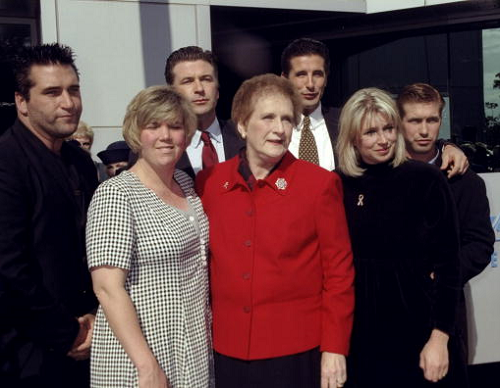 He has never served in the military.

He has been famous since he became an actor in his twenties.

He talks about everything – including his personal life – all the time.

However, we do not recall him ever discussing a circumstance in his past that might have led to him having PTSD long before this recent tragedy.

The PTSD claim is certainly an odd disclosure at an odd time. We can’t help but think that this disclosure is no more accidental than his tweets, her Instagram posts, or his TV interview.

Is it the truth? A lie? A ploy for sympathy? A legal strategy?

This blind item isn’t about guessing the identity of a person. It is about solving the mystery of Alec Baldwin’s history of PTSD… and why it is being brought up now!

Similar: He Is Going To Need Two Hands

1. Do you think Alec Baldwin has had PTSD for years?

2. How do you think it happened?

3. Why do you think it is being disclosed now?

4. How do you think this will all play out?