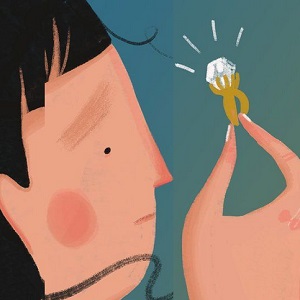 [BBC] When Anna, an actress, fell in love with an older and more successful actor he seemed like the perfect man. They quickly became engaged – but then he began to change. It took time for her to realise that her fairytale romance had become an abusive relationship.

I was working in a play at the time, and one of the other actresses told me that he was coming to see us perform that night.

We swapped numbers straight away. It turned out he’d already followed me on Twitter after seeing me in a show – I later discovered this was his first move with anyone he was attracted to.

A few days later, we ended up meeting for a coffee, and he was lovely. I remember thinking, “Wow, this is so amazing.” And then the texting began, which, looking back, should have been a huge red flag. I’d receive 50-100 messages a day, long ones. At one point he said to me, “I send you really long messages and I only get one sentence back.” I was pretty busy with my play and other things and I think anyone would have struggled to keep up with the volume.

He used to say that after our second lunch he’d realised he was in love with me. He came to see me perform, took me out for dinner and took a massive interest in my life, my childhood, and my family. I thought he was so different from the guys I’d been out with before.

Two days after my birthday, I stayed over at his house, and we slept together for the first time. There had been a couple of opportunities before then, but he hadn’t pressured me – which also made me think he was great.

He asked me to be his girlfriend the morning after. I said yes. The same day he gave me a whole talk about how now I was with him, the press were going to be interested in me, and how people were going to say bad things about him to me because of who he was.

Then he asked me if I’d read his Wikipedia, because I hadn’t ever seen his work and he said that I should get to know what he’d done. I said, “You’re sitting right in front of me, I’ll get to know what you’ve done from you.”

A couple of days later, he told me that he’d been thinking a lot and was getting really jealous about my ex-boyfriends and my past. He told me that he needed time to work on himself and would really appreciate it if I didn’t talk about them.

[Anna agrees. They move in together after three weeks of dating. Then he proposes.]

He had the engagement ring made based on one he’d seen five years earlier – before we’d even met. I hated it. It was made with his favourite stone, and it felt like I was fitting the ring, this perfect image in his head once again, rather than the ring being picked for me.

I had been struggling with work and it upset me to find that he was patronising and dismissive of my career. He would talk to me as though I didn’t know what I was doing. But actually I’ve been in the industry for years and done well – I just haven’t had his commercial success.

On the night of our engagement party, he didn’t make an effort with my friends at all. Afterwards, when everyone had gone home and we were opening our cards, I said, “Thanks for being so cool about Robbie being there” – Robbie was a friend I’d had a brief fling with in the past.

Thom had had a glass of champagne on the day we got engaged, but otherwise this was the first time he’d really drunk alcohol around me. He was steaming drunk, and he just flipped. He picked up a book he’d bought about jealousy and threw it across the room in my direction. He threw a marble ornament off the balcony and started screaming and swearing at me. He called me a slut, and told me to take my ring off and get out of his house.

One day the following week he came home from work and said that I made him want to kill himself. He talked about going to hospital, but didn’t because he was working the next day. This already wasn’t completely unexpected. Whenever we had an argument he’d begin by being aggressive and abusive, tearing me down piece by piece, then he would turn on the tears. In his eyes, he would always be the victim.

I wasn’t ready to leave him at that point but I began to be scared of him. It started to affect me physically, and I stopped eating. I told one friend what had happened, but I was too embarrassed to tell anyone else. This man was my fiancé and I didn’t want anyone to think badly of him.

However, his drinking escalated, and the arguments and the control and the abuse continued. He used everything he’d so carefully found out about my family against me. He said that my brother was a drug addict, my dad abandoned me, and my mum wasn’t a good mum. He said things he would later say he never remembered saying.

I’d tell myself that all couples argue, it’s never going to be perfect. But then not all boyfriends call you a slut and tell you to get out of their house.

If I had a friend over, I’d be really nervous about when he was coming home. I didn’t know what would happen, I didn’t want other people to see his anger, and I didn’t want to annoy Thom by having a friend there. It became a daily question: what is he going to do today? What landmines am I going to have to avoid? I had a ball of anxiety in my stomach.

If he was trying to isolate me from my friends, he was beginning to have some success. And for some reason, I began to feel I didn’t want my family at my wedding. I still don’t know how he got me to feel this way.

I made my career fit around his, and arranged any work around his schedule so I could go and visit him if he was away. After we got engaged, he told me to quit my side-job, which I enjoyed for its social side, and he said he’d put £2,000 in my bank account.

[Anna finds out that Thom just emailed another ex and called her the C word. Anna finally leaves Thom.]

I don’t think he thought I was going to go. From the day we met to the day I left, it wasn’t even six months. But luckily I had amazing people around me who could see what was happening and dragged me out of it, even though it wasn’t easy.

The hardest thing about getting out was trying to decipher what was the real him and what was the fake him – questioning whether this guy I met was just a character he was playing, to draw me in. I also had to come to terms with the fact that I’d been in an abusive relationship.

BG Note: You can read the entire story here.

[Optional] At what point do you think you would have exited this relationship?