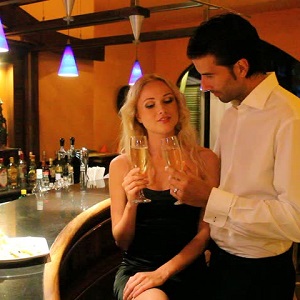 [Blind Gossip] A handsome movie star was spotted in a bar in a major city in the past week.

You are going to be shocked when you hear what he was doing!

No, he wasn’t on some sort of bender or snorting up piles of coke or getting into fights.

He was on a date!

We were a couple of tables away from him. He was obviously on a date.

They both seemed very drunk but they kept ordering cocktails. They also had a bottle of whiskey on the table. He told the server several times, “My girlfriend wants another drink,” so she wasn’t a one-night stand.

She was wearing a short red dress. She was average height, pretty, in her twenties. She had long, straight blonde hair but she looked Latina. They kept to themselves and I couldn’t hear their exact conversation, but they seemed very happy and were laughing a lot. I thought I heard her saying a few words in either Spanish or Portuguese.

How did they behave?

There was a lot of PDA. They were hugging and kissing. At one point she was sitting on his lap and had her arms wrapped around his neck while she was kissing him. They left around midnight. They were holding hands on the way out.

So… why in the world would we tell you that you are going to be shocked?

Well, because our handsome movie actor is very married.

To a young female movie star.

We’ve told you before that this marriage started out as a marketing setup and was on tenuous ground when they got married.

The fact that he was so brazenly on a date with another woman in public signals that their relationship has significantly cooled off and is now heading towards its end.

Similar: The Cool Off

[Optional] What do you think will happen next?