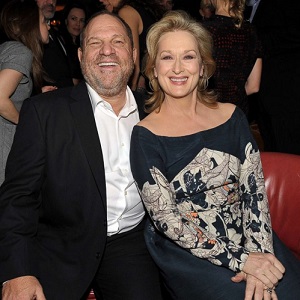 [Blind Gossip] Remember when Meryl Streep pretended not to know anything about Harvey Weinstein’s years of abuse of actresses?

Streep said, “Well, honestly for me in terms of Harvey, I really didn’t know… It really underlined my own sense of cluelessness… I didn’t know that he was in any way abusing people because he never asked me to a hotel room.”

Riiight. That was one acting job for which Meryl will not receive an Oscar.

Well, we have another liar for you!

This actor will say or do anything for an Oscar. That includes telling a blatant lie about another one of Hollywood’s biggest predators.

He is saying he had no idea about [Predator]. This is complete and utter bullshit!

Before he even took the role, he talked to MANY people – including his friends and the people on his team – about the allegations against [Predator].

So he DID know!

A separate source told us how they justified his taking the role.

They talked about it. They all decided that the film and the role were “Oscar material” and that he shouldn’t “throw it all away” and potentially “miss out” on an award just because of [Predator’s] personal history.

So he and his team made a collective decision that the role’s award potential was more important than anything else.

More recently, they made a collective decision about how he would publicly deal with those pesky questions about Predator’s history.

They were lucky because they got advance notice from [redacted] that the article was coming out and they had time to work with [Actor] to craft a response.

They decided that there way no way he could tell the truth. If he said, “Yeah, well I knew but I took the role anyway!” it would only lead to more questions and detract from the campaign.

They decided together that he needed to be kept “completely clean,” and the only way to do that was for him to feign ignorance about the whole thing.

He knows it’s a lie, and they know it’s a lie, but they are all willing to lie for that Oscar!

Maybe if he forgets his lines, his “girlfriend” can help him out.

[Optional] Yes or No: Is Actor doing the right thing?