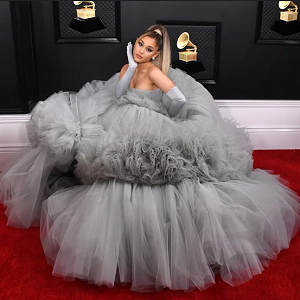 [Blind Gossip] Lots of fascinating outfits at The Grammy Awards! Some great, some not so great.

Billy Porter, who always brings the drama, completed his outfit with a fringed and motorized hat. 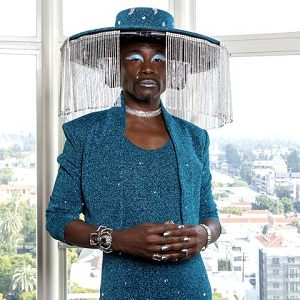 There was a funny moment when a famous actress had to deal with a comment about her own confusing outfit.

Our reporter was getting ready to interview [Actress]. Her husband [Singer] was a few feet away talking to someone else. It was so noisy that you really couldn’t hear jack unless you were close to someone and even then you practically had to shout.

A woman nearby was commenting on Actress’ choice of outfit.

We were about to do the countdown when we heard this woman nearby commenting on [Actress’] outfit. She obviously didn’t like the dress. She was yelling to the person next to her, “Oh my god! Look at that! What the hell is she wearing? It’s hideous! It doesn’t make any sense!”

It was noisy… but apparently not noisy enough. The Actress heard her and turned around to address the woman directly.

[Actress] looked at the woman and snapped, “I know, it’s gorgeous, isn’t it? Who designed YOUR outfit?”

That shut the woman up. The Actress began the interview as if nothing ever happened.

That sarcastic little exchange did not make it to air.

[Optional] What did you think of Actress’ outfit? Who had the best outfit of the evening?