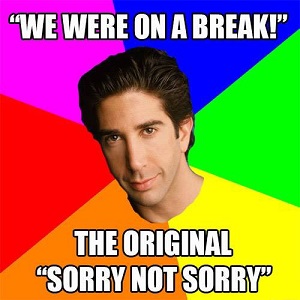 [Blind Gossip] This handsome actor was featured prominently in the first season of this popular cable TV series.

Despite the the series getting picked up for another season, he was not all that happy at the premiere party.

He thought they were back together, but they just broke up for the umpteenth time. This go round was supposedly about her cheating on him. Or “cheating.” It’s hard to say because sometimes he thinks they are together but she thinks they are on a break. We can’t even tell if it was ever a real relationship. Anyway, she likes the drama. He was annoyed that she pulled this right before the premiere.

Sounds like this couple needs an intervention by Ross Geller!