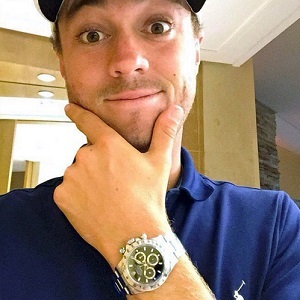 [Blind Gossip] This man is one of the highest-paid professional athletes in the world. He doesn’t just make a lot of money. He likes to show it off, too!

He recently asked his assistant to take of photo of him behind the wheel of a very expensive luxury car. He seemed dissatisfied with the photo. He saw a well-dressed man standing nearby.

He asked him what kind of watch he was wearing. Then he asked if he could borrow the watch for a minute. [Athlete] then put on the expensive watch and had the assistant retake the photo.

The funny part of this is that the man who lent him the watch had no idea who [The Athlete] was! He just thought it was amusing that a man sitting in a $250k+ car wanted to borrow his watch for a photo and pretend that he owned it!

So, when you see photos of Our Athlete showing off his expensive possessions… just know they might not even belong to him!

Not the PGA’s Justin Thomas, whose sponsor, Rolex, gave him the Daytona watch he is wearing in that photo.