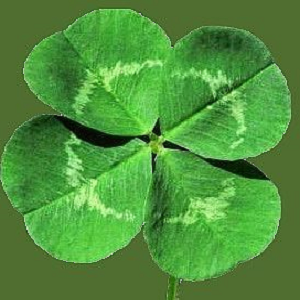 He may be great at his job, but he is lousy with his life.

He has a lot of issues, but we’ll just focus on one: Women!

We’re not going to pull any punches here. He has a lot of problems with women.

He’s cheating on his partner.

He’s sleeping with lots of randoms without protection.

He’s being accused of assault.

The first two facts expose him as a person of terrible character.

The third one exposes him as a dangerous criminal.

His team is working overtime to try to rehab his image as much as possible before trial.

Bring on the charities!

Working directly for a women’s organization would be distasteful, so the charitable work will center on organizations that focus on “emotionally compelling heroes.”

Why? Does he want people to think of him as a hero?

It’s more about positioning him as someone who is a sensitive, compassionate member of society who genuinely cares about the well being of others. Someone who is incapable of purposefully hurting anyone.

What a load of blarney.

Our athlete has been a jerk for a long time. It will take some incredible luck for him to pull off this public image rehabilitation!

Similar: So Many Babies

[Optional] Do you think this image rehab will work? 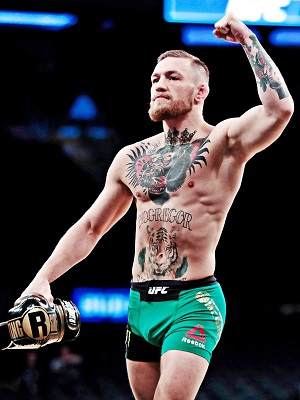 Conor McGregor is one of the greatest MMA fighters of all time.

Conor McGregor is also a boxer.

In his debut match, The UFC champ he was defeated by world champion boxer Floyd Mayweather Jr. 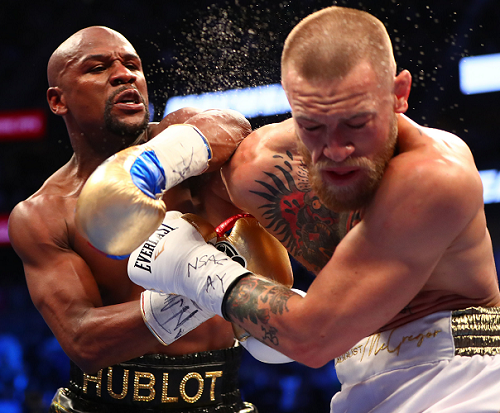 McGregor held his own against Mayweather, but ultimately went down in defeat by TKO in the 10th round.

Dubbed “The Money Fight,” the bout was the second biggest Pay Per View event in MMA history.

McGregor reportedly earned $130 million. Yes, even though he lost.

Out of the ring Conor McGregor has been more of a chump than a champ.

He has gotten in trouble for many things.

There was the usual speeding and drunkeness.

There was also his uncontrollable temper.

McGregor shattered the windows of a bus carrying a fighting rival. It was caught on video. 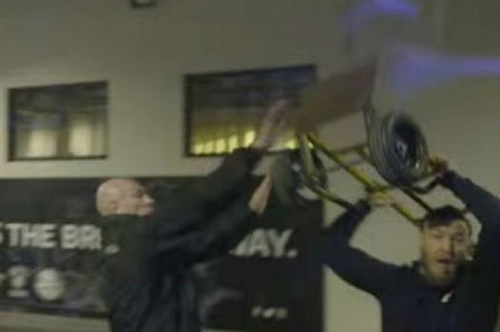 There were two separate incidents in 2018 and 2019 in which he allegedly assaulted women in hotels in Dublin.

There was also an incident in which he stole a man’s cell phone and smashed it, and another in which he punched a man in a pub.

There was another assault of a woman in 2020.

Then there was that raunchy video your friends at Blind Gossip told you about… right before his lawyers took it down (see Athlete in Bed for details)!

Although he has said a couple of time that he is retiring, the truth is that he wanted to continue to fight.

However, he did need to do a bit of a makeover to rehab his image as a jerk.

That meant doing something for charity.

To show his nice/softer/generous side, his publicists could not choose a woman’s organization. Too hypocritical. 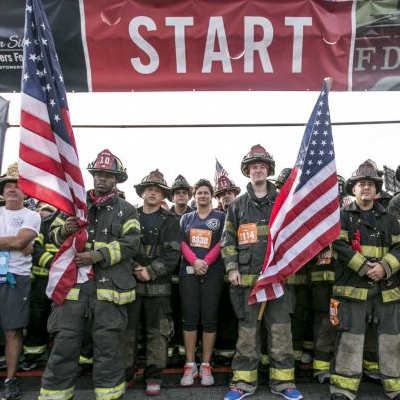 However, there is a “heroes” angle that they could make work with Conor McGregor’s reputation as a tough guy.

Here is his commercial for Tunnel to Towers.

Note how he calls himself heroic as a tie-in to the actual heroes? The writing and his performance are both awkward, but it is a charitable gesture.

Perhaps not completely charitable, though!

They also tried to tie in Proper No. 12, McGregor’s whiskey brand, with a fund raiser for one branch of Tunnel to Towers focused on front line workers.

That was awkward, as there is a clear tie-in to promoting McGregor’s  own product.

From Tunnel to Towers:

Earlier this year, Proper No. Twelve, the Irish Whiskey brand of Multiple weight MMA Champion Conor McGregor, donated $1 million to the Foundation in support of our work on behalf of our nation’s first responders. Now, McGregor’s Proper No. Twelve, is contributing a generous $100,000 to the COVID-19 Heroes Fund. Alongside this donation, Proper No. Twelve has created a limited edition Sportige T-Shirt, proudly sporting the phrase “One For All.” 100% of the proceeds of sales of this T-Shirt will benefit Tunnel to Towers.

Although he cheated on his girlfriend repeatedly, in August 2020, he announced that they were getting married!

Conor McGregor is getting married!

The 32-year-old former UFC champion announced the exciting news of his engagement on Saturday, sharing a sweet Instagram photo taken after he popped the question to his longtime love, Dee Devlin.

In the celebratory photo, McGregor wrapped his arms around his now-fiancée and showed off a big smile as Devlin flashed her sparkling engagement ring. 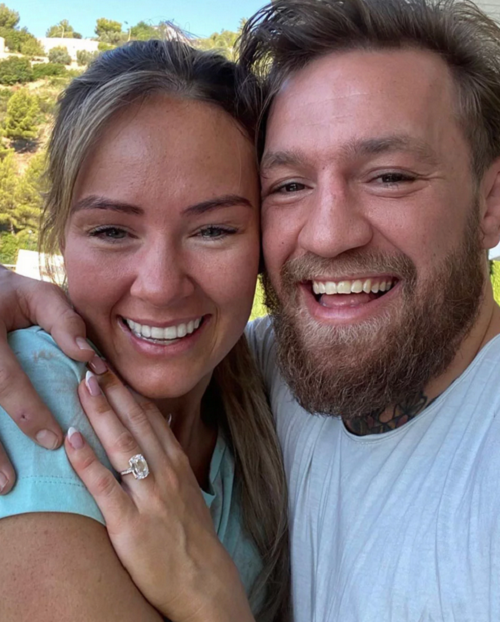 The act of charity and the substantial financial donation and the engagement announcement and the diamond ring may have done some good to rehab his image… because McGregor is now going to work again.

Conor McGregor has come out of “retirement” and is going back into the ring!

The first fight is going to be a UFC bout, not a boxing match. 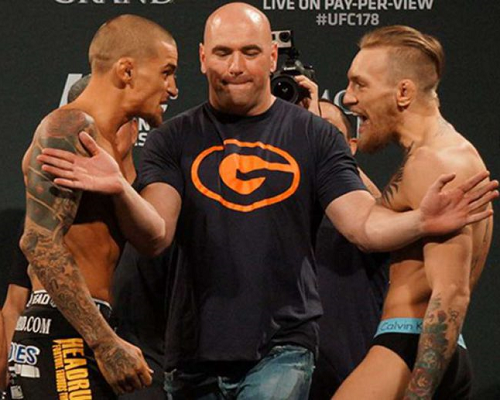 After returning from retirement, fighting and then retiring again, Conor McGregor has his next UFC fight scheduled. McGregor will face Dustin Poirier in January 2021, the UFC announced on Monday. The rematch will serve as the main event of UFC 257, which will take place on Saturday, Jan. 23.

…As is usually the case for McGregor, the journey to this fight was unusual. McGregor had been on vacation in mid-September when he was detained in Corsica after allegations of attempted sexual assault. Around the same time, McGregor tweeted about being drug tested by USADA on his yacht despite claiming to be retired.

…McGregor and Poirier previously faced off in September 2014, with McGregor scoring a TKO in just 1:46.

McGregor wants to return to boxing, too.

His manager has been heard saying that McGregor and boxing legend Manny Pacquiao will “definitely” fight in the future. 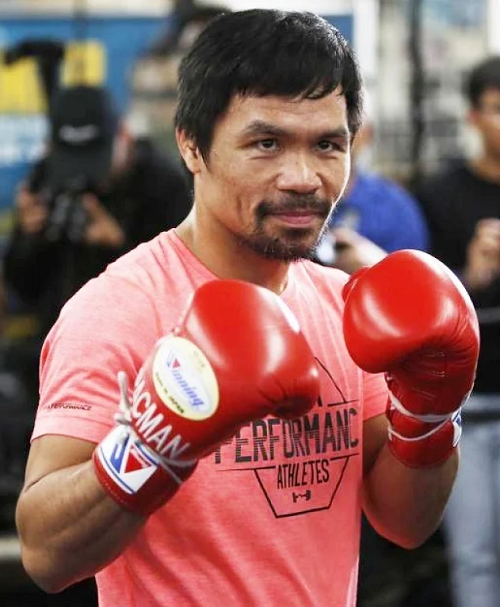 Now that would be an interesting match.

Floyd Mayweather is 5’8″ and leads with his right hand, but the 5’9″ McGregor held his own in the ring against him.

However, Pacquiao is only 5’5″ and uses a southpaw stance, so McGregor would have to make some adjustments to compensate.

So, Conor McGregor is back.

Look how happy he is! 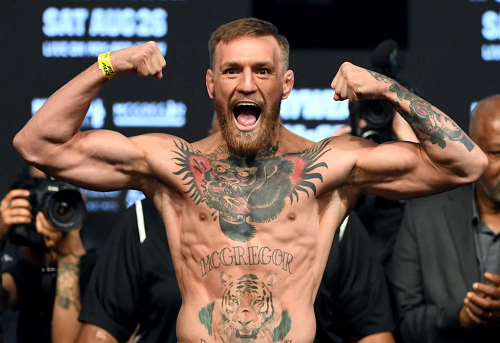 Well, until the next trial…

Congratulations to Rodieb123 for being first with the correct response!

Related: His Luck Ran Out