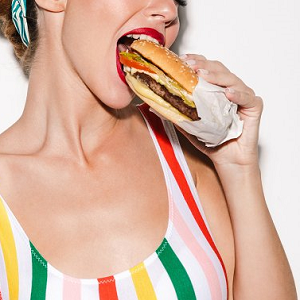 [Blind Gossip] Less than a decade ago, before she achieved worldwide fame, this fortyish actress did a spread for a men’s magazine.

While she did not take all of her clothes off, the shoot is certainly meant to portray her as every man’s fantasy. You know, the kind of seductress who could make something as mundane as eating a hamburger look sexy.

During the video, she removes some clothing and preens for the camera and seductively sucks on her finger.

You know. Your typical feminist film.

Anyway, at the time, she was proud of the feature, as she thought it would help elevate her profile and her acting career.

However, after she met a rich guy from a prominent family, she just wanted to make it go away.

She could not mess with her acting roles but she thought she could do something about this one. She had her reps contact the magazine and ask if they could take down the video from the shoot.

Since the video was still generating traffic (and income) for the magazine, they were not eager to do so.

Basically, what was she willing to give to make the video go away? She was more famous now, so the magazine was willing to take it down, but only if she did a new feature for them. She declined.

So, why was our actress so darn eager to get this video taken down?

Is it because she looked ugly in the shoot?

No, she actually looks very pretty.

There were two other reasons.

Posing for a men’s magazine did not fit her new, elevated position in society. Oh, and she really hated how her chest looked.

Our actress is no stranger to plastic surgery. The size of her chest has actually changed quite a bit over the years. It seems that she she got breast enhancements many years ago but had the size modified a couple of times after that.

This was one of her flatter periods.

And, yes, there is a marked difference between what she had then and what she has now.

Anyway, the next time some magazine lauds her “natural beauty”… just know that she isn’t completely natural.

[Optional] Do you think the rest of her is natural?