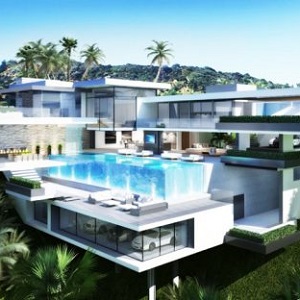 [Blind Gossip] This male movie star is trying to deflect some of the criticism away from himself over his new home.

Of course, there’s the usual brouhaha over the hypocrisy of his claiming to be an ardent environmentalist while simultaneously flying on private jets and owning an outrageously large home. Then there’s the neighbors’ complaints about the size of the house, the aesthetics, the impact on their town, etc.

So, how is he dealing with all this criticism? By throwing his wife under the bus!

He says that he would be happy living in a modest home, but she was the one who kept adding rooms so the plans just got bigger and bigger until it was three or four times the size he wanted. He can’t say no to her.

So it’s her fault the house is so big? We don’t know if he can’t say no because he wants to indulge her… or because she is the one wearing the pants in the family!

Similar: They Do Not Live Together

[Optional] What is the biggest house (in square feet) that you think you would feel comfortable living in?