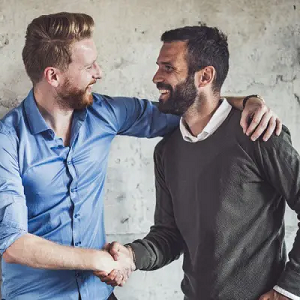 [Blind Gossip] These two handsome actors are both movie stars.

They started out in the industry together and have enjoyed a lot of success working on projects both as a team and as individuals.

We’ll call them Tall and Short.

Tall and Short both had their choice of projects and became very rich. Both men married and had children.

Alcohol, drugs, infidelity. It was bad.

Tall lost jobs. His wife kicked him to the curb and they eventually got divorced. He went through a string of inappropriate women. That certainly didn’t help.

Being friends with an addict can take its toll.

Short and his wife had their own family to worry about and protect, and Tall was a mess. All drama, all the time. They didn’t want a drunk Tall – and his girl of the week – over at their house.

After being best friends for years, Short began to distance himself.

He didn’t completely abandon Tall and continued to encourage him to get sober, but Short and his wife started hanging out a lot with another famous actor and his wife. That friendship felt easy by comparison.

After numerous stints in rehab, Tall finally seems to be coming back from the dark side. He is sober (right now). He has a steady and stable girlfriend, an actress who is serious about her career.

Tall’s new girlfriend seems to be a good influence on him. She encourages him to maintain a healthier lifestyle. She gets along well with Tall’s ex-wife and his kids.

Short is back in the picture, too. Tall’s new girlfriend is a big hit with Short and his wife. An added bonus is that they speak the same language. The couples are hanging out together again.

So, the two things that brought Tall and Short back together are sobriety… and Tall’s new girlfriend.

Similar: Horsing Around With Alcohol

[Optional] Do you think Tall should/will marry his new girlfriend?