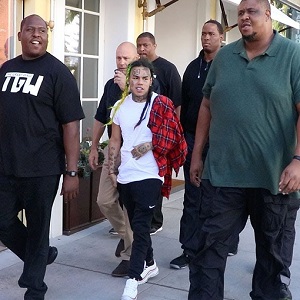 He thinks that you will hate on whomever he is currently hating on. That’s why he has been making nasty comments about two female celebrities lately.

We have to tell you, though, that his big ego goes way back.

Let’s talk about something funny that happened when he was releasing an album about ten years ago!

He was on a promotional tour, riding around in a huge bus wrapped with pics of him and his album and the release date.

His promo bus pulled up in front of building in a major city. He had an appointment inside to do an interview at a media company.

He was probably sitting there waiting for crowds to gather around his bus but nobody showed up. Eventually he got out of the bus. And even though there was no one paying attention to him, he had a total of FIVE bodyguards surround him to walk him into the building!

So he’s walking through our office trying to shield his face with his arm. His bodyguards start yelling. “Stand aside! Get back!”

What? Nobody was even near them! We’re all sitting at our desks and we’re all looking at each other like, “Who are they even talking to?” We started laughing because it was so stupid and one of the bodyguards looks over and yells, “Don’t even look at him!”

We get a lot of celebrities and big music artists in our office, but this was the most ridiculous, over the top, egotistical visits we ever had! We still talk about it.

Perhaps the bodyguards were telling the invisible groupies to stand back because they had to clear a path for the musician’s huge ego?

We don’t mean to dog on this one celebrity. There are plenty of celebrities with big egos and excessive entourages. Our musician is just a little more obnoxious than most!

Similar: Big Egos Would Have To Settle