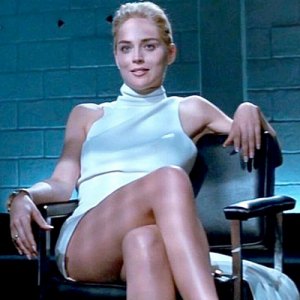 [Blind Gossip] Actress Sharon Stone, best known for her star-making role in the thriller film Basic Instinct, recently wrote a memoir about her life in Hollywood.

Several stories from the book were excerpted in Vanity Fair.

Three of the stories are blind items. Here is the first!

I am proud of my success in my work.

Each [project] is sweet, even if it didn’t work out as a box-office hit or even if the thing as a whole failed.

Even with the worst directors, like the one who wouldn’t direct me because I refused to sit in his lap to take direction.

This #MeToo candidate called me in to work every day for weeks, when [my son] Laird was a brand-new baby.

Sharon Stone has three sons. Here is an older photo of them.

[The Director] had me go through the works—hair, makeup, and wardrobe—and then wouldn’t shoot with me because I refused to sit in his lap and take direction.

Yes, this was a multimillion-dollar studio film, of which I was the star, and the studio didn’t say or do anything.

I just kept coming to work and spending the day constantly getting retouched in my trailer and being with my baby.

So she was a new mom, with the baby in her trailer, getting sexually harassed by her boss on the set. Furthermore, when she refused to comply with his demands for inappropriate contact, her obstructed her from doing her job. Unbelievable.

Of course the film was a bomb.

The level of insecurity and unprofessionalism, and I would guess drug abuse, required to make those kinds of choices never leads to good work.

But as a superstar, which at that point I was, and a woman, I had no say.

That was how it was in my day. Even a high, abusive director had more power than I did.

Name the director and the film.