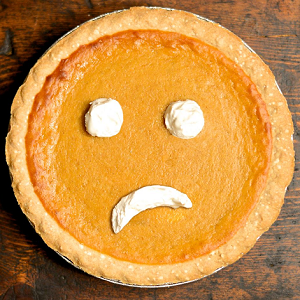 [Blind Gossip] The Thanksgiving plans of this seemingly happy married couple were recently thrown into chaos.

They were going to do Thanksgiving dinner with his side of the family.

However, he recently let slip that his family has not always had a good opinion of his wife.

His mom did not want him to marry her. She told him that [Wifey] was a gold-digger and an opportunist and begged him to wait at least another year before getting married.

Of course, he ignored that advice.

[Wifey] is pissed that he told her this. She is trying to be forgiving but she just can’t get past it.

Oh, and here’s the real kicker.

He told her that his mom really wanted him to marry the girlfriend he had before her.

Wifey worked darn hard to win the ring over his singing Ex-Girlfriend… so don’t expect her to walk away from him over a little matter like this!

We don’t know where they will end up on Thursday.

Let’s just hope there isn’t a family brawl over the pumpkin pie!

[Optional] Favorite pie? Who makes it?