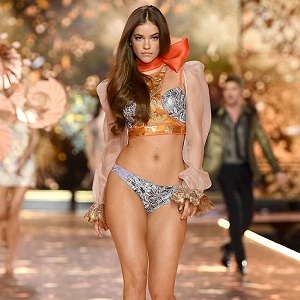 [Blind Gossip] Many of the models walking in the Victoria’s Secret fashion show had the support of their significant others. One did not.

While Dylan Sprouse was giving girlfriend Barbara Palvin a standing ovation, another model admitted that her man would not be attending… or even watching!

She was saying that he doesn’t like to see other men gawking at her walking around in her underwear. He thinks that is something that should be for his eyes only.

Did he not know that his girl makes a living walking around half-dressed?

Similar: Do Not Mess With The Head Cheerleader

[Optional] Which model looked the best at the show?