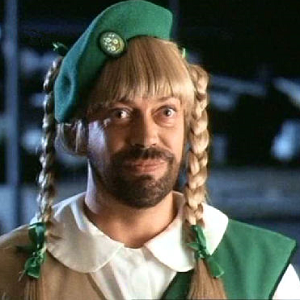 [Blind Gossip] Celebrities who are staying at home need to find new ways to bring attention to themselves!

Some celebrities are participating in an internet challenge called “Flip The Switch,” where they trade clothes with their partner (who is usually of the opposite gender).

We have an interesting note about one of the couple who took on the challenge.

Dressing in women’s clothes is nothing new for him. He has been cross-dressing for years, always in private. He especially likes women’s underwear and makeup. He has trouble with high heels, though.

Walking in high heels for the first time could certainly challenge even the most athletic person!

Does he have a closet full of women’s clothes?

No, it’s a small collection. He only does it in private. I don’t think he’s ever gone out in public and tried to pass as a woman, so it’s so weird that his first public appearance as a “woman” was on the internet with [female celebrity]!

[Optional] Do you think she knows about his cross-dressing?