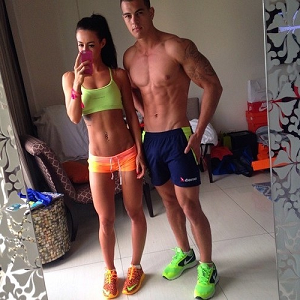 Everything about her is perfect. Her body, her kids, her rich and famous man, the big rock on her finger, her career.

She keeps telling you that there is even Oscar buzz around her!

Let’s talk about her relationship with her man for a minute.

Despite neither having any education past high school, they both like to gush about how brilliant the other person is.

Is he really the brilliant man she wants you to think he is?

Well, according the relative of a famous actress he used to date…

He is literally the dumbest person any of us every met. He used to try to use big words to sound smart, but it was obvious he had no idea what the words meant. He thought because he was a famous athlete that everyone should worship him. We all wondered how [Actress] could stand being with him for more than five minutes. He would criticize her body and he used to cheat on her, too. Dumb and a jerk. We were actually relieved when they broke up!

We’re looking forward to the wedding of Oscar Buzz and Dumb Jerk!

[Optional] Do you think Buzz and Jerk make a good couple?