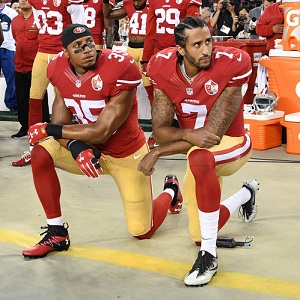 [Blind Gossip] You may have heard that NFL owners just voted to approve a policy mandating that team players and team personnel on the field stand during the National Anthem. If they sit or kneel, they will face some sort of unspecified penalty.

Well, there’s one player who has already decided that he is not happy about either of those options… so he is going to test the rules!

He is mad and he says that these are two stupid choices and he does not want his free speech suppressed. He’s talking about going on the field, BUT instead of just standing there quietly, he will do his own sort of protest. Maybe raise his fist or do a Wakanda salute or turn his back on the flag. Something that will give the NFL the finger. He wants the other players on the team to join him.

To make it a little easier to guess his identity, he is an offensive player who plays for a team on one of the coasts. He was one of the kneelers last year.

Similar: Pressured To Stay In The Tunnel

[Optional] Is the new policy fair or unfair? If you were a player, what would you do? Please keep your comments civil.